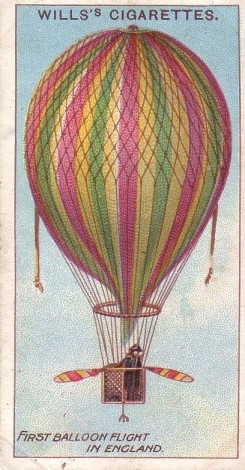 Along with being the first to fly a balloon in England, Vincenzo Lunardi also was the first to try and utilize a way propel it rather than rely in the fickle fates of the wind.

Although James Tytler had already flown a balloon in Scotland flying over Edinburgh on August 27, 1784 (more on this below) and France had its success the Montgolfier brothers, the rest of Great Britain, particularly the English, were still skeptical of the balloon.

Lunardi, along with Englishman George Biggin decided to together fly a hydrogen balloon at the Artillery Ground in London, England on September 15, 1784. With 200,000 people in attendance and all of them becoming impatient with the delay in properly inflating the balloon, Lunardi decided to appease the restless crowd by taking off without Biggin in a not-fully inflated balloon. Accompanied by a dog, a cat and a caged pigeon, he successfully flew north stopping once at Welham Green dropping off the angry cat with a woman before completing his 38.62-kilometer (24-mile) journey in Stanton Green near Hertfordshire. 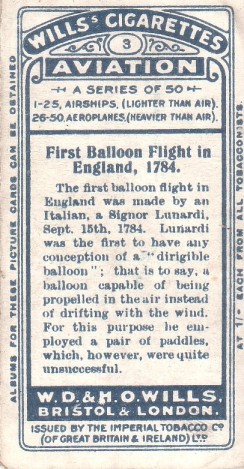 For some strange reason Biggin remained friends with Lunardi, and the two of them made many subsequent flights. On June 29, 1785, the partners announced they would fly with two other passengers—a Colonel Hastings and a Mrs. Sage (anyone know of a first name?). Perhaps underestimating Sage’s weight of over 90.72-kilograms (200-pounds), the balloon would not lift, so Lunardi and Hastings both step aside and the balloon rose. The two had a chicken lunch and became the first to pollute from the air as they casually tossed chicken bones over the side during a relatively uneventful flight. However, upon landing in a farmer’s field they were accosted by the farmer for ruining his crops. 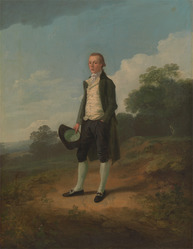 September 8, 1785 saw Lunardi fly with Thomas Baldwin from Chester, England. Baldwin sketched the countryside from the air creating the first aerial views published under the book title Airopaidia (Airopaidia: Containing the Narrative of a Balloon Excursion from Chester, the Eighth of September, 1785, taken from Minutes made during the Voyage: Hints on the Improvement of Balloons, and Mode of Inflation by Steam: Means to Prevent their Descent over Water: Occasional Enquiries into the State of the Atmosphere, etc. The Whole Serving as an Introduction to Aerial Navigation: with a Copious Index. Chester: Printed for the Author, by J. Fletcher, 1786). 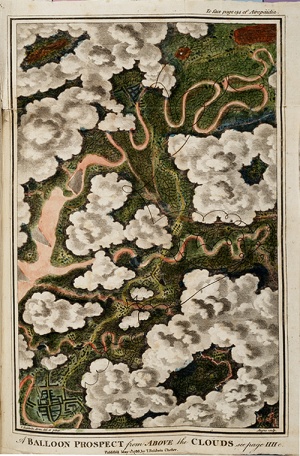 Baldwin then wrote a highly detailed and lengthy account of the voyage including everything from an inventory of the items taken (including the weight of each item) to a florid description of his sensations as he flew:

“A Tear of pure Delight flashed in his Eye! of pure and exquisite Delight and Rapture.” 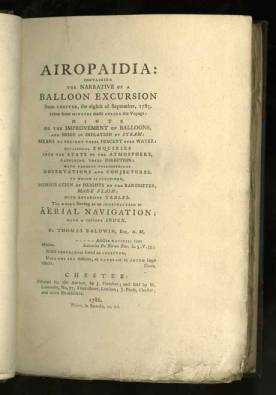 The account of the voyage itself is interspersed with and followed by discourses upon hints and improvements such as the best time of day for voyages, how to land in windy weather, and how best to conduct experiments while aloft. The work includes several engravings (one by Stothard) from the sketches made by Baldwin while aloft.

As for the first flight in Great Britain done by James Tytler on August 27, 1784, it is obvious that Wills Tobacco – an English company, thought very little of a flight occurring first in Scotland… not as cool as a flight in England, is my guess… 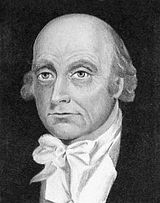 Here is a description of James Tytler’s flight as described in the London Chronicle of the day:

“Early this morning, this bold adventurer took his first aerial flight. The balloon being filled at Comely Gardens (near Holyrood in Edinburgh, Scotland), he seated himself in the basket, and the ropes being cut, he ascended very high, and descended quite gradually on the road to Restalrig, about half a mile from the place where he rose, to the great satisfaction of those spectators who were present. Mr. Tytler went up without the furnace this morning; when that is added, he will be able to feed the balloon with inflammable air, and continue his aerial excursions as long as he chooses. Mr. Tytler is now in high spirits, and in his turn laughs at those infidels who ridiculed his scheme as visionary and impracticable. Mr. Tytler is the first person in Great Britain who has navigated the air.”

While Tytler’s flight is indeed more impressive, the back story of Lunardi ditching his compatriot to fly first in London is a better story – even if Wills’s Tobacco card  does not touch on it with their card.

Andrew was born in London, UK, raised in Toronto, Canada, and cavorted in Ohtawara, Japan for three years. He is married, has a son and a cat. He has over 35,000 comic books and a plethora of pioneer aviation-related tobacco and sports cards and likes to build LEGO dioramas. He has written and been an editor for various industrial magazines, has scripted comic books, ghost-written blogs for business sectors galore, and hates writing in the 3rd person. He also hates having to write this crap that no one will ever read. He works on his Pioneers Of Aviation - a cool blog on early fliers - even though it takes him so much time to do. He also wants to do more writing - for money, though. Help him out so he can stop talking in the 3rd person.
View all posts by mreman47 →
This entry was posted in Balloons, Firsts, Lighter-Than-Air, Pilots, Tobacco Card and tagged first man to fly in England, Italian aviation, Italian balloonists, Tobacco Aviation Cards, Vincenzo Lunardi. Bookmark the permalink.