The last thing I noticed when setting up this particular article was the fact that the Wills’s tobacco card actually spells the name of the aviator incorrectly. That fact can be seen on the reverse of the card below.

With such a simple fact wrong, it made me wonder what else could be incorrect, so I really went to town on the research and did, as usual, my best to separate fact from misinformation.

BUT – is it a spelling mistake? No less an authority than the Smithsonian has an article up on its website without hyphenating the surname.

The results seem to be evenly split. Let’s assume the name has no hyphen.

While the genius of Alberto Santos Dumont will not be doubted, it should be known that his family did have some money, as his father was a coffee tycoon and his mother an upper-class lady.

But privilege does not necessarily purchase true brains. The family coffee plant utilized some (for the time) high-tech equipment, which led to Santos Dumont’s fascination with machinery, including steam and steam-powered locomotives. In fact, he apparently learned to drive a train by the age of 10.

(Editor’s Note: At the age of 6, I was taught how to drive a subway train in Toronto and piloted the TTC (Toronto Transit Commission) train for three stations to its terminus – during rush hour. That was in 1970. If that happened today, that kind train driver would lose his job. He was right there with me to ensure I didn’t screw up. I recall getting the train up to 50 miles an hour at one point. Unlike Santos Dumont, I did not end up a great aviator.)

After Santos Dumont’s father was badly hurt in an industrial accident, the young would-be aviator was given the fortune to do with as he pleased – which meant studying and tinkering with machinery.

When Santos Dumont was 18-years-old, he went to Paris to study chemistry, physics, astronomy and mechanics, all of which he used in his aviation carer. Would you be surprised to learn that Santos Dumont used to read the novels of Jules Verne? He did. Everyone should.

Dirigibles – it is based on the French word ‘diriger’, which means ‘to direct’ or to ‘steer’.

After flying his first spherical balloon ‘Brazil’ (original spelling = Brésil) on July 4, 1898 in Paris utilizing a gas-powered motor, and a second balloon ‘America’ that won Santos Dumont the Aero Club of Paris award to study atmospheric currents, he put both aside to work on the process of steering balloons.

I should perhaps state that within the Aero Club of Paris competition, there were a total of 12 other balloons, but his ‘America’ reached the highest altitude and stayed aloft for 22 hours! Part of that success can be attributed to the balloon having a huge capacity of 500 cubic meters.

As for his attempts at steering balloons:

The second balloon, Santos Dumont no. 2, was not a successful flier owing to a combination of design and weather. The long and narrow balloon held over 7,000 cubic feet of gas and gave a further 44 lbs. of ascensional force. For some reason, Santos Dumont made the first attempt to fly it during a windy rain storm which caused the balloon to fold and be blown into nearby trees.

His third balloon ‘Santos Dumont no. 3’ flew on November 13, 1899 and circled the Eiffel Tower a few times before heading towards the Park and flying to Bagatelle field.

(Editor’s Note: I should state that the date of the third balloon flight is a BEST GUESS by myself, as every source I found seems to have copied a Smithsonian educational website (HERE)  – which is fine, EXCEPT the site (and all others but this one) suggest that the flight took place in 1890. Really? His third balloon flew eight years before the first two? Granted, the true information is out there, I just have not been able to find it thanks to a sea of misinformation on the Internet. If anyone out there knows the exact date of the Santos Dumont no. 3, let’s make history and get the facts right – let me know.)

I am going to skip over dirigibles no. 4 and no. 5. They were each successful in their way – but I’m not writing a book here. I will state that with no. 5 he did win the Encouragement Prize presented by the Scientific Commission of the Aero Club of Paris.

The prize was to be awarded to the balloonist who, taking off from Parc (Park) Saint-Cloud, France, circumnavigated the Eiffel Tower and returned to the starting point for a distance of about 15.29-lilometres (9.5 miles) in less than thirty minutes.

As you can see from the back of the Wills’s card, it describes that balloon’s dimensions – take THAT Wikipedia!

The Santos Dumont no. 6 dirigible was 110-feet long by 20-feet wide. It had a gas capacity of 22,239 cubic feet and a lifting power of 1,518 lbs and was powered by a 12 horsepower gas motor that turned a single propeller.

Here’s what happened when Santos Dumont made an attempt at the challenge:

On October 19, 1901, Santos Dumont lifted his dirigible, the Santos Dumont no. 6 from Parc St. Cloud at 2:20PM, but upon leaving the park, a guide rope caught on a tree forcing him to descend to free it. He lifted off again at 2:42PM, rose 228.6-meters (250 yards) and pointed his airship towards the Eiffel Tower going in a straight line.

After five minutes, he arrived at the Eiffel Tower and began steering the craft around it. Commencing his return voyage, the time was at 8 minutes and 45 seconds, as he had a nice wind at the balloon’s back. Returning against the wind, the going wasn’t as quick, but it did not affect Santos Dumont’s steering, as the airship reached St. Cloud in a total time of 29 minutes and 15 seconds.

Photo of Alberto Santos Dumont in his dirigible rounding the Eiffel Tower.

So did he win the prize? No. Instead of descending immediately, Santos Dumont made a celebratory sweep of the Aero Club grounds, with the result being an additional one minute and 25-seconds before ground crew were able to gather the guide rope—thus Santos Dumont exceeded the 30-minute time limit by 40 seconds.

When the dirigible’s basket came close enough o the crowd, Santos Dumont leaned out and asked: “Have I won the prize?” The crowd shouted yes, but committee member Comte (Count) de Dion walked through the crowd and told Santos Dumont, “My friend, you have lost the prize by 40 seconds… that’s the decision of the committee in accordance with the rules of the contest.”

The crowd was livid, but eventually Santos Dumont shrugged it off saying he had intended to give the 100,000 French Franc prize money to the poor. If the crowd wasn’t in love with him before, they certainly were now.

Santos Dumont is correct in claiming he had earned the prize because he had reached the park within 30 minutes and that the original contest rules made no mention of the craft having to touch the ground within the 30-minute time limit.

At this time, Henri Deutsch de la Meurthe (the gent who was offering up the prize money) arrived at the field—it is unknown why he wasn’t there to witness it in the first place—embraced him and declared: “For my part, I consider that you have won the prize.”

And so – he was awarded the monetary prize, with the poor getting their share.

While that ends the story of this particular Wills’s card, Santos Dumont still had plenty of flying left in him.

After the Wright brothers’ flights in 1903, Santos Dumont began to experiment with heavier-than-air machines and established at Neuilly, France, the first airship base that year. He also constructed a vertical-propeller model, and, in 1906, built a machine, the 14-bis, based on a box kite. 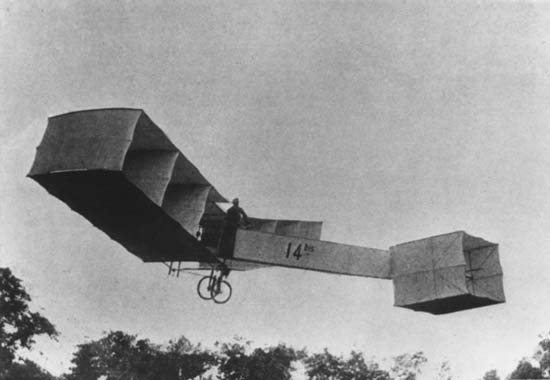 On October 23, 1906, the canvas and bamboo 14-bis bi-plane with a non-detachable landing gear—named ‘Oiseau de proie’ (French for “Bird of Prey”)—flew a distance of 60-meters (200-feet) at a height of two- to three-meters (6.5- to 10-feet) becoming the first officially observed heavier-than-air powered flight in Europe. He won the Archdeacon Prize founded by the Frenchman Ernest Archdeacon as the first aviator to fly more than 25-meters (82-feet).

Now, just so you all know, Santos Dumont and his aviation feats has him mentioned as the lead on two other Wills’s Aviation cards – #33 about the 14-bis plane (which I have already written but will present eventually – it is card #33, and I am only just now presenting card #8), and #45 – about his monoplane XIX.

For fun, I thought I would share with you a card of mine – front and back – from Ogden’s Tab Cigarettes that features a photo of Santos Dumont in his airship circa 1901.

(Editor’s Note: You’ll notice the hyphenated spelling of his name in the Ogden’s card? The ‘M’ stands for Mister or Monsieur)

In 1909, he produced his ‘Demoiselle’ or “Grasshopper” monoplane—the single wing precursor to the modern light plane.

He returned to Brazil in 1928, but due to developing Multiple Sclerosis around 1910, and despondency over the global desire to utilize aircraft in war, he committed suicide in 1932.

Andrew was born in London, UK, raised in Toronto, Canada, and cavorted in Ohtawara, Japan for three years. He is married, has a son and a cat. He has over 35,000 comic books and a plethora of pioneer aviation-related tobacco and sports cards and likes to build LEGO dioramas. Along with writing for a monthly industrial magazine, he also writes comic books and hates writing in the 3rd person. He also hates having to write this crap that no one will ever read. Along with the daily Japan - It's A Wonderful Rife blog, when he feels the hate, will also write another blog entitled: You Know What I Hate? He also works on his Pioneers Of Aviation - a cool blog on early fliers. He also wants to do more writing - for money, though. Help him out so he can stop talking in the 3rd person.
View all posts by mreman47 →
This entry was posted in Heavier-Than-Air, Lighter-Than-Air, Pilots and tagged 14-bis, Alberto Santos Dumont, Demoiselle, First to round the Eiffel Tower in a Dirigible, Grasshopper, kids driving trains, Ogden's Tabs Cigaraettes, Santos Dumont, santos dumont no. 1, santos dumont no. 2, santos dumont no. 3, santos dumont no. 6, steering a dirigible. Bookmark the permalink.