Situated within the grounds of the famous WWI and WWII Duxford airfield situated in Cambridgeshire, UK, a new permanent exhibition focusing on the base’s history will open to the public on March 28, 2013.

IWM (Imperial War Museum) Duxford is Britain’s best-preserved WWII airfield, with a fascinating history that dates back to the First World War.

With historic aircraft regularly seen taking to the skies from IWM Duxford’s wartime airfield, the new permanent war museum will offer rich displays of aircraft combined with the powerful stories of the men and women involved, discussing how aviation and war impacted on people’s lives along with its influence on the social and economic trends of the region.

With one of the finest collections of tanks, military vehicles and artillery in the UK, IWM Duxford also shows the impact of technological development on war and conflict.

Designed by MET Studios and IWM Duxford’s Interpretation and Collections Team, the Historic Duxford exhibition is set up to bring to life the airfield’s lush history as a fully-operational base from 1918 to 1961—and done with a family audience in mind.

“The project will encompass a trail around some of the historic buildings that visitors may not usually connect with,” says MET Studio managing director Lloyd Hicks. “Personal stories and testimonies will give visitors a direct insight into the lives of the men and women who lived and worked on this busy RAF base.” 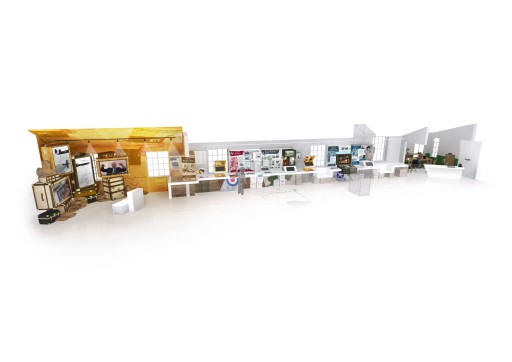 “Visitors can find out what it was like to serve in the Royal Air Force and how several generations of men and women were shaped by their experiences here.”

There’s an introductory film will describe the first impressions of some of the 1500-plus people who lived at RAF Duxford during its time of active service – using just a small part of the incredible archive of recorded testimonies that IWM has gathered over the course of several decades.

Now… to me, the fact that the exhibition also includes a large amount of documentation on airfield support staff such as the ground crews, domestic staff and cleaners to go along with the expected information on pilots and commanding officers.

To me – while I enjoy reading about the exploits of the pilots, to get a better appreciation of anything, you need to know what things were like from the ground up. And here, at IWM Duxford, the visitor can also see how leisure time was spent, what the living quarters were like, and… even an airfield romance.

Sure! Everybody loves a fly boy!

“Accessibility and inclusivity were absolutely key to the design of this exhibition,” notes Hicks, “and not only with reference to the breadth of subject matter.”

He continues: “We worked very closely with IWM Duxford and an access panel, formed specifically for this project, in order to design for the visually-impaired and hearing-impaired, as well as for visitors with physical disabilities. The 3D model of RAF Duxford is a good example, where we are using vibrating buttons and smells to represent the airfield, canteen and aircraft hangars, with carefully written audio directions to create an exhibit which is accessible to all.”

Hicks says, however, that the greatest challenge of the project was how to fit and integrate such a huge amount of information into the Watch Office space—a footprint of a mere 90-square-meters.

Site manager Gurney adds: “The team have worked hard to create an exhibition that meets the expectations of visitors to a national museum and the interests of our family audiences as well as doing justice to the fascinating history of the site and the stories of those who lived and worked here.”

For information on the globally renowned MET Studio (after Metropolitan Wharf in London), please visit www.metstudio.com.

Andrew was born in London, UK, raised in Toronto, Canada, and cavorted in Ohtawara, Japan for three years. He is married, has a son and a cat. He has over 35,000 comic books and a plethora of pioneer aviation-related tobacco and sports cards and likes to build LEGO dioramas. He has written and been an editor for various industrial magazines, has scripted comic books, ghost-written blogs for business sectors galore, and hates writing in the 3rd person. He also hates having to write this crap that no one will ever read. He works on his Pioneers Of Aviation - a cool blog on early fliers - even though it takes him so much time to do. He also wants to do more writing - for money, though. Help him out so he can stop talking in the 3rd person.
View all posts by mreman47 →
This entry was posted in Airfields, Museums, News and tagged aviation museum, Imperial War Museum, IWM Duxford, MET Studios, WWI airfield, WWII airfield. Bookmark the permalink.