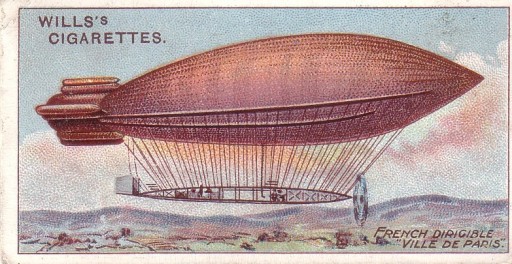 But… let’s start there anyway.

The ‘Ville de Paris’ was the privately-owned dirigible of Henri Deutsch de la Meurthe (see also Wills’s card #8) of Paris, France who was quite involved in the growth of aviation in that country.

So why does that make this an important enough dirigible to gain its own card in this aviation series?

Well, after France lost its best dirigible, the Patrie, Deutsch de la Meurthe made a gift of his private airship to the French Army. What a guy. What a rich, guy, if I may be so franc. 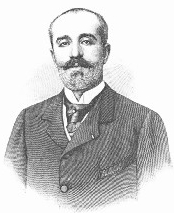 The Deutsch Prize of 100,000 French Francs was to be awarded to the balloonist who, taking off from Parc (Park) Saint-Cloud, France, circumnavigated the Eiffel Tower and returned to the starting point for a distance of about 15.29-lilometres (9.5 miles) in less than thirty minutes.

The Grand Prix d’Aviation prize was created by Deutsch de la Meurthe with Ernest Archdeacon (also know as the “Deutsch-Archdeacon Prize“), offering 50,000 Francs for the first person to fly a circular one-kilometer course in a heavier-than-air craft. It was won on January 13, 1908 by Henry Farman flying a Voisin biplane at Issy-les-Moulineaux in a time of 1 minute 28 seconds. Because the Wright Brothers flights were not officially witnessed, Farman’s flight was considered the distance and speed record.

Deutsch de la Meurthe’s father, Alexander, started up a company for the processing and marketing of vegetable oils in 1845. In 1859, following the discovery of petroleum oil in Pennsylvania, he looked at ways petroleum oil could be used in all forms of industry.

I have no idea what Meurthe means. There’s a Meurthe River in France.

Anyhow… Henri Deutsch de la Meurthe thought that a key way to push the use of petroleum, would be to ensure the development of small internal combustion engines.

To do this, Henri heavily promoted automobile development, even going so far as to give one to then-French President Marie Francois Sadi Carnot.

Not one to miss an opportunity, Deutsch de la Meurthe also became interested in aviation – see big things for his petroleum and air craft.

In case you aren’t as bilingual as myself or Google Translate, “Ville de Paris”(the name of the dirigible I’m supposed to be talking about)  translates to “City of Paris”, which as we all know is the capital city of all of France. (I’m saying this in my head with a horrible French accent.)

Now… if you are going to do anything involving the name of your town, city or country, one wants to ensure they do a good job to honor the name.

The first dirigible named ‘Ville de Paris’ was actually built in 1902 and based on the drawings of Victor Tatin, a French aeronautical engineer.

Tatin, seemed to be a man ahead of his time, in my opinion. Check out the model airplane below:

1879 model of the Aéroplane by Tatin.

Called the Aéroplane, the model had a wingspan of 1.90 meters (6.2 feet) and weighed 1.8 kilograms (4.0 lb). It had twin propellers and was powered by a compressed air engine.

Yes… that’s the actual Tatin model in the photo above.

Tested on a circular track at the military facility in Chalais-Meudon, France, the model airplane was tied with string to a central pole so that it could rotate.

The model ran under its own power, achieving flight after attaining a ground speed of eight (8) meters per second.

Eleven years later in 1890, Tatin and Charles Richet tried to build a steam-powered airplane with both fore and aft propellers. In 1911, he worked with Louis Paulhan designing the Aero Torpedo monoplane, that as the name would suggest, was extremely streamlined.

And yet… Tatin’s dirigible – the Ville de Paris – wasn’t a great success – flying like a led zeppelin. Which was why I mentioned the whole honor-thing. As such, a second version was built in 1906, based on plans of Edouard Surcouf, who along with being an aeronautical engineer had also physically constructed balloons.

The gas envelope was built at Surcouf’s shop in Billancourt, with the mechanical components constructed at Voisin’s shop nearby. The drawings were based on Colonel Renard’ ship ‘France’ built in 1884, with the ‘Ville de Paris’ having many similarities.

In September of 1907, Henri Deutsch de la Meurthe offered the use of the ‘Ville de Paris’ to the French government in case of war or emergency. After France’s military dirigible ‘Patrie’ was lost two months later, its military authorities made arrangements to take over the ‘Ville de Paris’.

The middle section is cylindrical, tapering to a cone in both the aft and stern sections.

At the rear, the tail section is cylindrical with eight smaller cylinders (fins) attached to it and had has a volume of 600-cubic meters (21,192-cubic feet).

The balloon’s envelope is divided into three sections or compartments from front to rear, with the dividing walls constructed from permeable cloth, though the dividers are not fastened to the bottom. When the middle compartment is filled and the airship rises, the division walls are lifted up from the bottom of the gasbag allowing free communication between the three compartments. 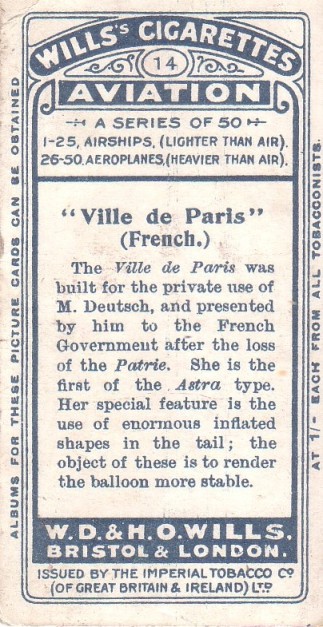 The envelope is made of a strips provided by the Continental Tyre Company that run around the bag with the ends meeting on the under meridian known as brachistode and is achieved by cutting out the material with the advantage of bringing the seams parallel to the line of greatest tension offering a tight seal.

Featuring a long suspension, the weight is distributed along the length of the gas-bag. A doubled band of heavy canvas was sewn with six rows of stitches along the side of the envelope.

Hemp ropes running into steel cables transmit most of the weight of the car to the canvas bands and envelope. From both sides and below these first bands are two more bands.

Lines run from these to points half-way between the gas bag and the car and then radiate outward to different points of attachment on the car giving it a triangular system of suspension allowing the car and envelope to be rigidly attached to each other.

The engineer and mechanic are at the front with the pilot and steering wheels situated at the center of gravity.

Its Argus motor puts out between 70- to 75-horsepower. A single propeller held by a steel arm was placed at the front of the car working in undisturbed air, but there was a difficulty in attaching it rigidly. The propeller has two 6-meter (9.68-foot) long blades made of cedar with a pitch of 8-meters (26.24-feet). The propeller is able to make 250 revolutions per minute (rpm) with the engine at 900 rpm.

Stability was maintained by the cylinders on the tail section, with a volume calculated to only lift its weight but not increase or decrease the ascentional force of the airship.

The rudder had a double surface of 13.94-square-meters (150-square-feet) placed at the rear end of the car, 21.95-meters (72-feet) from the center of gravity. Though not balanced, it is inclined to the rear meaning that if the steering gear should break, its weight would point to the rear. Two pairs of movable horizontal planes: one at the car’s rear with four-square meters (43-square feet); and one at the center of gravity with eight-square meters (86-square feet) drive the craft upwards or down without gas or ballast loss.

To conclude, let’s go back to Henri Deutsch de la Meurthe. He was the man who owned the dirigible after all.

Now… as we have seen above, Deutsch de la Meurthe was keenly interested in aviation – perhaps initially as a way to promote his family interests in furthering the use of petroleum oils in the fledgling automobile and aviation industries.

Still… you’d think that despite being so involved in being the money man for much of France’s aviation success, and owning his own dirigible, Deutsch de la Meurthe did not actually go up in an airplane until sometime in May 1911 when pilot Alfred Leblanc took him up for a spin in a Blériot monoplane.

And yet… on May 21, 1911, Deutsch de la Meurthe was involved in a plane crash… but perhaps not the way you would expect.

At the start of the 1911 Paris to Madrid air race, a monoplane flown by Louis Émile Train immediately had engine trouble.

Now the smart thing to do would be to land immediately, but he looked down and saw a group of mounted cavalry providing escort to the most prestigious visitors to the event.

Train tried to avoid the cavalry, and instead veered into the dignitaries, including: France Prime Minister Ernest Monis (knocked out and had a broken leg); Monis’ son and Deutsch de la Meurthe suffered relatively minor injuries; while France Minister of War Henri Maurice Berteaux lost an arm and later died from a fatal head wound.

Deutsch de la Meurthe – he died of natural causes in 1919.

Oh yes… to save the best for last the company founded by the Deutsch de la Meurthe family… it was called Pétroles Jupiter, which would later become  a part of the petroleum giant Shell.

Yes… that one… the one I visited and filled my car up with this morning.

I guess aligning itself up with the auto and aviation industry worked out quite well for the Deutsch de la Meurthe family.

Andrew was born in London, UK, raised in Toronto, Canada, and cavorted in Ohtawara, Japan for three years. He is married, has a son and a cat. He has over 35,000 comic books and a plethora of pioneer aviation-related tobacco and sports cards and likes to build LEGO dioramas. He has written and been an editor for various industrial magazines, has scripted comic books, ghost-written blogs for business sectors galore, and hates writing in the 3rd person. He also hates having to write this crap that no one will ever read. He works on his Pioneers Of Aviation - a cool blog on early fliers - even though it takes him so much time to do. He also wants to do more writing - for money, though. Help him out so he can stop talking in the 3rd person.
View all posts by mreman47 →
This entry was posted in Firsts, Heavier-Than-Air, Lighter-Than-Air, Pilots and tagged Aero Torpedo, aeroplane, Alfred Leblanc, Charles Richet, Continental Tyre Company, early French aviators, Edouard Surcouf, first model airplane to fly, France Prime Minister, French aviation pioneer, French Dirigibles, Henri Deutsch de la Meurthe, Louis Émile Train, Louis Paulhan, monoplane, oil industry in France, Pétroles Jupiter, Privately-owned dirigible, Shell Oil, Victor Tatin, Ville de Paris. Bookmark the permalink.