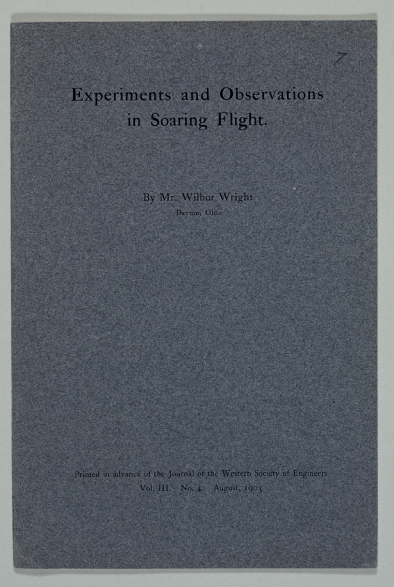 Even before the Wright Brothers flew for the first time on December 17, 1903, they had cobbled together quite the arsenal of information from gliding… data that they would incorporate into creating the world’s first airplane capable of sustained flight and safe landing.

I found a book entitled Experiments and Observations in Soaring Flight (above) written by Wilbur Wright… an off-print taken from the Journal of the Western Society of Engineers Vol. 8 [misprinted “III” on front wrapper], no. 4 – printed in Chicago in August of 1903.

Measuring 228 mm x 152 mm with a caption title and eight photographic halftones in text, the above image is the First edition, offprint issue of Wilbur Wright’s second report of his and Orville’s flying experiments that he read to the Western Society of Engineers on June 24, 1903.

It describes how, after the glider trials of 1901, Orville Wright constructed a wind tunnel in Dayton, Ohio that the brothers used for a systematic series of tests of over 200 wing and bi-plane combinations. On the basis of these results the brothers built a new glider, equipped with a vertical rear rudder which offset the twisting movements caused by the warping of the wings.

The nearly1,000 trial fights made during the summer of 1902 with this superior machine are described in the present report, as are the Wrights’ extensive observations of bird fight.

Their main objective was to learn how to control the glider, as, in Wilbur’s words, “the machine seemed to have reached a higher state of development than the operators” (p. 8).

The second objective of the 1902 experiments was “to obtain data for the study of scientific problems involved in fight” (p. 10).

Both goals were realized during the six months following the presentation of this report, and on December 17, 1903—a mere 8eightyears after their initial entry into aeronautical research—the Wrights made the first motorized fight in history at the Kill Devil Hills, south of Kitty Hawk. 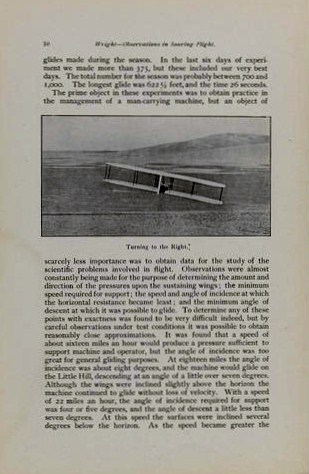 It’s a wonderful piece of Americana and aviation history.

To see it in its original form from the Journal of the Western Society of Engineers (18 pages worth), click HERE and visit the U.S. Library of Congress.

Andrew was born in London, UK, raised in Toronto, Canada, and cavorted in Ohtawara, Japan for three years. He is married, has a son and a cat. He has over 35,000 comic books and a plethora of pioneer aviation-related tobacco and sports cards and likes to build LEGO dioramas. Along with writing for a monthly industrial magazine, he also writes comic books and hates writing in the 3rd person. He also hates having to write this crap that no one will ever read. Along with the daily Japan - It's A Wonderful Rife blog, when he feels the hate, will also write another blog entitled: You Know What I Hate? He also works on his Pioneers Of Aviation - a cool blog on early fliers. He also wants to do more writing - for money, though. Help him out so he can stop talking in the 3rd person.
View all posts by mreman47 →
This entry was posted in Concepts, Firsts, Gliders, Heavier-Than-Air, Lighter-Than-Air, Research and tagged Books on early aviation, Christies, Experiments and Observations in Soaring Flight, Gliders, Orville Wright, Wilbur Wright, Wilbur Wright's book on aviation. Bookmark the permalink.