If you think the term ‘Zodiac’ is familiar to you beyond the constellation shapes, then read on and learn how a balloon helped form a major 21st century company that saves lives.

The Zodiac as a dirigible, owes its origins to Maurice Mallet, who along with France’s other famous balloonist, Paul Jovis, founded the Union Aéronautique de France in an effort to develop new ballooning and aeronautics techniques and equipment.

Mallet and Jovis did a lot of ballooning together, and a few days after this blog article is published, I will publish another blog detailing one such account.

After Jovis’ death in 1891, Mallet continued ballooning and became renowned when he made the longest balloon flight from Paris to Walhen, Germany over a period of three days in 1892.

The company was renamed Ateliers de Constructions Aeronautiques by Mallet in 1899 and while others sought to create heavier-than-air craft, Mallet continued his work on balloons, creating new fabrics and technologies before concentrating on dirigibles, forming another new company with Count Henri de la Vaulx called the Société Française des Ballons Dirigeables (French Airship Company) on March 5, 1908. 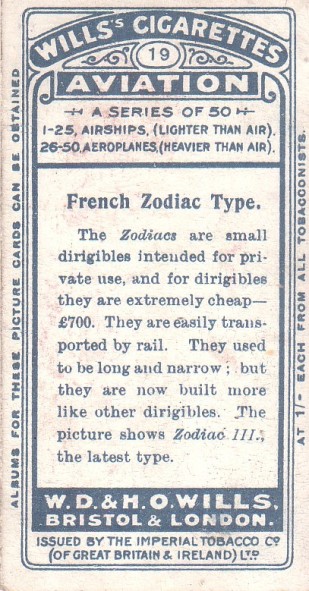 In 1909, Mallet created a new type of foldable, dirigible—the Zodiac—that was easy to transport and set up, and was targeted for private enthusiasts as well as for business purposes, specifically the advertising sector. He then renamed his company Société Française des Ballons Dirigeables et d’Aviation Zodiac. Yes… that Zodiac company – the one that builds… well… keep reading.

Mention must be made of the series of Zodiac airships, that back in 1909 were constructed first for pleasure, and years later for military purposes.

The Wills’s card above shows the Zodiac III, as do the two immediate photos below.

The small Class 2 Zodiac III dirigible in August 1909 that traveled 50-kilometers in one hour-25minutes-10-seconds.

A color photo from 1909 showing the Zodiac III taking off.

The year 1911 marked the end of a transition. The enterprise was no longer a craft venture producing to order. It was now an industrial company manufacturing in large runs and bidding for procurement contracts.

Another interesting airship was the ‘Spiess’ (which I think translates to ‘Spit’), a French rigid-type, constructed in 1913 of timber by the Zodiac company—it was a success even when compared with contemporary zeppelins (see Wills’s card #23 – eventually… we’ll get there).

Other rigid -type dirigibles – the zeppelins – are constructed with aluminum, but the Spiess was made with hollow wooden beams.

An interesting fact, is that Spiess was designed by Joseph Spiess, and engineer who had actually first conceived of the rigid-type dirigible, and filed a patent for it, back in 1873… the year before Ferdinand von Zeppelin began designing his rigid-type dirigibles that would become known as zeppelins.

Unfortunately for Spiess, he did not build his first rigid-type dirigible until Zodiac helped construct the Spiess in 1913.

Interior of the Spiess dirigible. Photograph courtesy of BJJS.

The Zodiac company had actually given the dirigible the name Zodiac XII but, when it came time to fly, the air craft had the name “SPIESS” in uppercase painted along the side of the balloon’s envelope.

The Spiess was the only French Zodiac rigid airship built, and was the longest French airship built before the World War I.

The Spiess was designed from the original 1873 patents of Joseph Spiess. The first attempt at building the airship had it at 113-meters long, and when it first flew on April 13, 1913, Mallet and Spiess agreed that the Spiess was underpowered and needed more lift.

The Spiess’ envelope was enlarged to 140 meters to hold three more gas cells. They also added a second engine.

but later it was extended to 140-meters.

Spiess then presented the airship to the French government as a gift. After further trials it was not accepted by the French military, because their view was that smaller non-rigid types would be more effective. 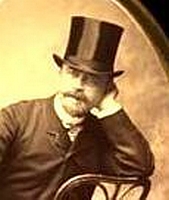 The Spiess airship seems to have been broken-up in 1914.

Even before this, however, Mallet had begun designing and constructing aeroplanes, constructing a biplane for famed French aviator Maurice Farman in 1909.

With the advent of WWI in 1914, Mallet’s company was building balloons and dirigibles solely for France’s military, as the craft were thought to be useful to drop bombs on the enemy. But…

… Mallet was also building aeroplanes, and ramped up production to create over eight aeroplanes a month to provide a better option for bombing runs.

Because he who lives by the sword often dies by the sword, Mallet’s company lacked customers when the war ended. In an effort to stave off financial ruin, Mallet began building patrol boats for the French navy in 1920 which helped keep afloat its dirigible interests so that it could introduce a semi-rigid dirigible in 1930.

In 1934, Zodiac developed the first prototype inflatable boats, which became known in France as ‘zodiacs’.

With the Zodiac company now an expert in inflatable fabrics, techniques and materials, it tried its hand at constructing an inflatable kayak, which then led the company to produce an inflatable boat capable carrying torpedoes and other bombs.

By the 1990s, Zodiac was well-established as a major global player in marine and aerospace sectors and began to create airbag systems for automobiles, and nowadays, the company is still a major aeronautics manufacturer—a fit business for an aviation pioneer company.

Zodiac’s customers include Airbus, Boeing, various departments of defense, and most of the world’s civil airlines. The company generates the majority of its sales (64 percent) through the civil aviation sector, including some 28 percent of sales from its aircraft seating operations alone.

Zodiac’s inflatable boats continue to provide some 13 percent of sales, however, and have made the Zodiac brand name known throughout the boating world.

The chief architect of Zodiac’s growth from a small single-product company in the late 1970s to a diversified manufacturer and distributor with nearly (French Franc) ₣5.5-billion in annual sales is chairman and president Jean-Louis Gerondeau.

A public company that helped initiate Paris’s secondary market in the early 1980s, Zodiac continues to be controlled by its founding families, which hold 30 percent of the company’s shares and some 40 percent of voting rights. This position helps to protect the company from the possibility of a hostile takeover.

Andrew was born in London, UK, raised in Toronto, Canada, and cavorted in Ohtawara, Japan for three years. He is married, has a son and a cat. He has over 35,000 comic books and a plethora of pioneer aviation-related tobacco and sports cards and likes to build LEGO dioramas. He has written and been an editor for various industrial magazines, has scripted comic books, ghost-written blogs for business sectors galore, and hates writing in the 3rd person. He also hates having to write this crap that no one will ever read. He works on his Pioneers Of Aviation - a cool blog on early fliers - even though it takes him so much time to do. He also wants to do more writing - for money, though. Help him out so he can stop talking in the 3rd person.
View all posts by mreman47 →
This entry was posted in Firsts, Lighter-Than-Air, Motors and Engines, People, Pilots, Tobacco Card and tagged Ateliers de Constructions Aeronautiques, Early French aviation, Joseph Spiess, Maurice Farman, Maurice Mallet, Paul Jovis, Rigid-type dirigible, Société Française des Ballons Dirigeables, Société Française des Ballons Dirigeables et d'Aviation Zodiac, Spiess, Union Aéronautique de France, Zodiac. Bookmark the permalink.