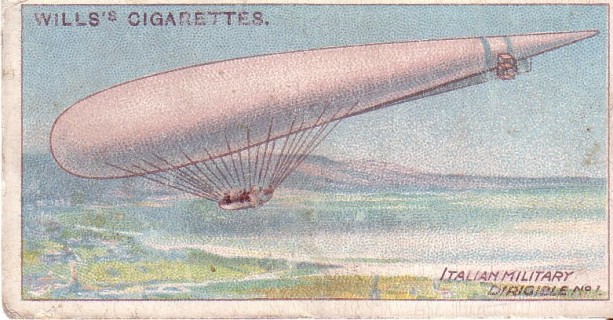 Before we start, I must say that there is a lot and yet very little information on this topic/card. Much of what I see from two respected aviation texts of the day is contradictory… not to mention some of the stuff found while perusing the Internet.

I have done the very best I could in trying to figure out exactly what was going on – but having completed this article, I still have my doubts as to how accurate I really am here… and that is the first time in five years of blogging on multiple sites that I can actually say that. And… I am disappointed in both myself and the data I found.

For example, if we were to look at the Wikipedia entry for Gaetano Arturo Crocco, we might see that it lists a dirigible known as the N1… but according to D’Orcy’s Airship Manual of 1917 and Jane’s All The World’s Aircraft of 1913, there is no such creature…  making me very confused as I tried to piece together what that entry really meant. Perhaps N1 means No.1… but which No.1, as the company had more than one… and rebuilt it into another alphabet No.1 at a later date… Ugh. There simply wasn’t any clarity.

As such… despite the many hours I put into this one, perhaps we should all just avoid the physical data on the dirigibles, and merely concentrate on the history. Let’s begin:

Back at the turn of the 20th century, Italy—like a lot of Europe—was a truculent country, and was looking for ways to pump itself up. Initially, it was thought that utilizing the dirigible as a means for reconnaissance and for bombing raids was the path to take.

At the time of these Wills’s Cigarettes Aviation cards (1910)  Gaetano Arturo Crocco was a young-ish man working with dirigibles…. but later on in life, he became the founder of the Italian Rocket Society, and went on to become Italy’s leading space scientist – which doesn’t sound like much, but in the 1960s, thanks to his efforts, a number of Italian satellites were launched with the aid of NASA. 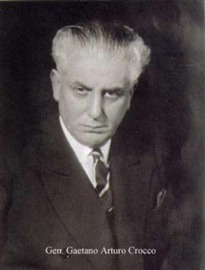 Tell you what – we’ll come back to Crocco’s later life at the end of this article.

In 1898, when Crocco was in the Italian Army Engineers Corps in the wireless (radio) department he met Captain Mauro Maurizio Moris. The Captain was leading a so-called Specialists Brigade, and was deeply interested in the new field of aeronautics.

Moris wanted Crocco on his staff, which was, at the time, testing anchored balloons on the Bracciano Lake, north of Rome. And so… in 1904, Crocco began experimenting with airships.

In 1906, Gaetano Arturo Cruco and Ottavio Ricaldoni (an Italian born in Argentina) were asked to by the Italian military to develop a dirigible.

The first dirigible was the experimental craft typically named No. 1, which was completed in October of 1908. I’m pretty sure about this.

The first thing you will notice, is the fact this – and all subsequent dirigibles from Crocco and Ricaldoni have the same teardrop shape and boxkite tail… a design that they hoped would make it more aerodynamic and easier to control.

It was 63 meters long, had a volume of 2,750 m³ (cubic meters), and with a 105-horsepower Clement-Beyard motor, that powered two screws (propellers) to generate a speed of 51 kph.

No. 1‘s ballonet was 500 m³ in seven compartments. It was fitted with a rigid keel-girder, which was retrofitted with an articulated one at the reconstruction…

Which brings us to No. 1-bis – later designated as Airship 1 , completed in August of 1909. Now 60 meters long and with a volume of 3,450 m³, and a new ballonet of 650 m³, the engine still maintained its 105-horsepower, but now was able to hit 52 kph. I guess the added buoyancy helped offset the larger size of the craft.

During initial testing of this prototype there were strong head winds, but the Airship 1 was still able to reach a speed of 40.23-kph (25-miles per hour) and an altitude of 1,000 meters (3,280-feet). Its claim to fame was traveling 300 kilometers in seven hours.

In light of that success, the Italian government decided to construct two similar dirigibles for the Italian Army, and reportedly a third one that was twice as large for the Italian Navy. Though further research has show it built a lot more than that.

Anyhow, the Army Airship Works run by Crocco and Ricaldoni decided, once again, to rework that experimental balloon for the Italian Army and construct two new ones for the Italian Navy.

The semi-rigid No. 1-bis/Airship 1 was rebuilt as P.1 and maintained the name Airship 1 for the Army (I think). I do know that the Wills’s card (see image below) calls the No.1 the Ricaldoni – but is it the No.1-bis? Is it also known as the Airship 1, and was this the same one that was rebuilt as P.1?  This is one of those things that confused me.

I do know that the P.1 was still 60 meters long – and in all incarnations had a silk balloon – had a balloon volume of 4,200 m³, still used the 105-horsepower Clement-Bayard motor that offered 52 kph, but now had a ballonet that was 800 m³. It was able to travel 470 kilometers distance in 14 hours. 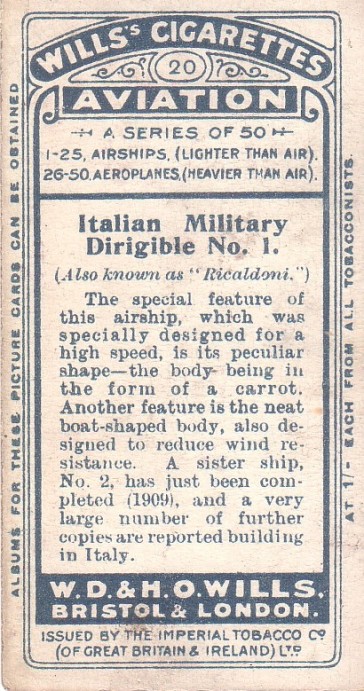 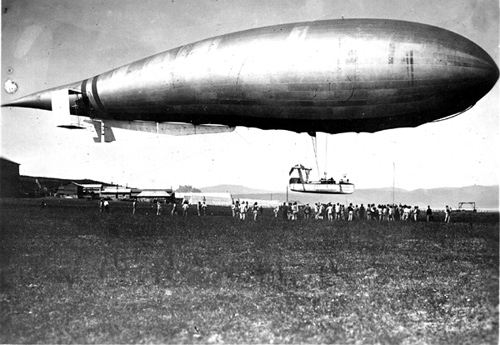 Inaugural flight of the Ricaldoni P.1 Italian dirigible in 1908. Though some websites calls this the N1.

Called P.2, the No.2 also had a sister dirigible, the P.3 completed in 1911. These P-designated dirigibles were so named for the Army, while the Navy got the M’s.

An Italian Wikipedia entry lists the P.4 as 90 meters long with a volume of 14,650 m³ with four Maybach motors capable of 50 kph… which is either completely incorrect, or Jane’s and D’Orcy are wrong. See HERE if you wish. A little digging shows that the Italian Wikipedia entry is based on information from a more modern vintage. This was why I attempted to create this website/blog… to fix the inaccuracies where possible. Just maybe not with this one.

The P.4—aka the Citta di Jesi—made many raids during WWI, and was destroyed by Austrian seaplanes on August 5, 1915 while raiding Pula.

The did differ, however, in their engine compliment.

The M.3 was shot down by anti-aircraft guns on May 4, 1916 near Gorizia, while coming home from a raid on Lubiana.

Perhaps the differening information is due to the fact that these were all military dirigibles, and providing exact information might not have been the most appropriate thing to do?

Then again… just because it’s available – thank you Jane’s:

Inaugural flight of the Ricaldoni P.1 Italian dirigible in 1908.

Below is a US Patent for a car suspension (gondola) for airships – a patent granted on November 8, 1910. 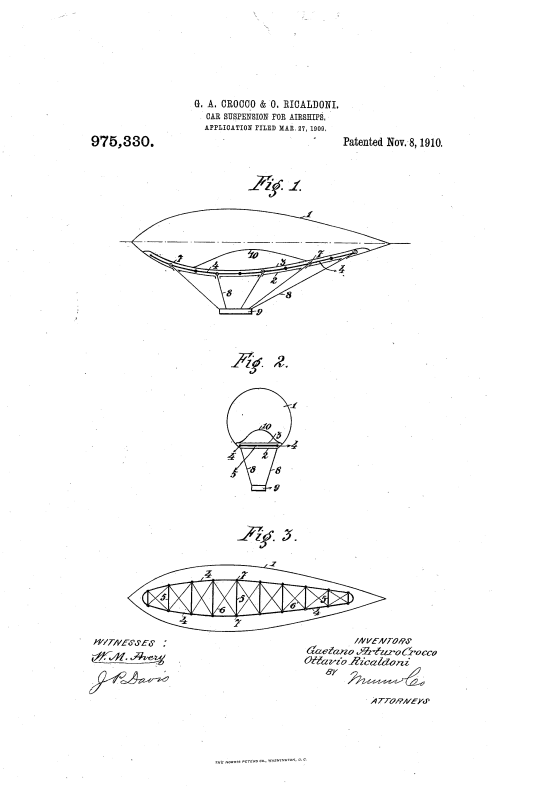 1910 US patent for gondola suspension by Crocco & Ricaldoni

In September of 1911, war broke out between Italy and Turkey over who owned Libya. Italy, to strengthen its might in the area sent: five pilots and six reserve pilots, 30 ground crew and nine-aircraft, including three Nieuport, two Blériot, two Etrich and two Farman aeroplanes.

I mention this because Italy had a lot of firsts here – it had the first employment of heavier-than-air deployment in a war, including the first strategic reconnaissance mission, the first bombing on the first night of the war, and even hunting by air.

On March 5, 1912, the Italian military also became the first to use dirigibles for a military purpose during reconnaissance west of Tripoli behind Turkish lines, using both the P.2 and P.3 dirigibles.

By the end of WWI, Italy had fourth-largest number of aircraft in the world. 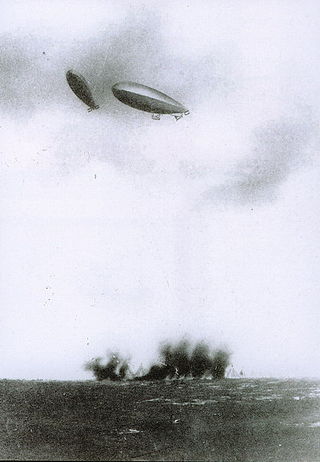 Later in 1912 Crocco and Ricaldoni tested an hydroplane on the Bracciano Lake while experimenting with airships together with other researchers. Crocco also kept studying propellers’ shapes and sections, and in 1914 drew plans for a closed-circuit wind tunnel to be built in Rome.

In 1927 the Aeronautic Experimental Institute where Crocco was working, obtained a ₤200,000 Italian Lira financing (equivalent to today’s €1-million Euro or about US$1.34-million) to develop black-powder-fueled (solid-propellant) rocket motors.

In 1929, Crocco designed and built the first liquid-propellant rockets, while also drawing plans for the first Italian-built combustion chamber, tested in 1930 with the help of his son, Luigi Crocco.

In 1932, Crocco began work with monopropellants, which is a fuel and oxidizer combined in one chemical liquid), a pioneer in this field.

When World War II started in 1939, the lack of government finances sent him to teach academics, leading the Aeronautic Engineering School from 1935 to 1942 and then again from 1948 to 1952.

As head of the school, he performed research on flight mechanics, structural design, and high altitude flight in addition to his work in rocket propulsion.

In 1951 after founded the Italian Rocket Association (AIR), he held a meeting on the problems of a manned spaceship re-entry in the atmosphere. Remember – no one had even been in orbit yet.

But… in 1956, the old man devised the “One-Year Exploration-Trip Earth-Mars-Venus-Earth” paper, suggesting that a ship could use the Mars and Venus gravitational fields as propelling forces to cut dramatically the traveling time of a space capsule.

This is what is known nowadays as a ‘gravitational slingshot’ or ‘gravity assist’ or ‘swing-by’. Bloody brilliant.

Andrew was born in London, UK, raised in Toronto, Canada, and cavorted in Ohtawara, Japan for three years. He is married, has a son and a cat. He has over 35,000 comic books and a plethora of pioneer aviation-related tobacco and sports cards and likes to build LEGO dioramas. He has written and been an editor for various industrial magazines, has scripted comic books, ghost-written blogs for business sectors galore, and hates writing in the 3rd person. He also hates having to write this crap that no one will ever read. He works on his Pioneers Of Aviation - a cool blog on early fliers - even though it takes him so much time to do. He also wants to do more writing - for money, though. Help him out so he can stop talking in the 3rd person.
View all posts by mreman47 →
This entry was posted in Firsts, Heavier-Than-Air, Lighter-Than-Air, Motors and Engines, People, Pilots, Tobacco Card and tagged first aviation bombing, Gaetano Arturo Crocco, Italian aviation, Italian aviation pioneer, Italian Military Dirigible No. 1, Italian Rocket Association (AIR), Italian space program, Italy Airship 1 dirigible, N1 dirigible, origin of gravitational slingshot, Ottavio Ricaldoni, Ricaldoni dirigib;e. Bookmark the permalink.