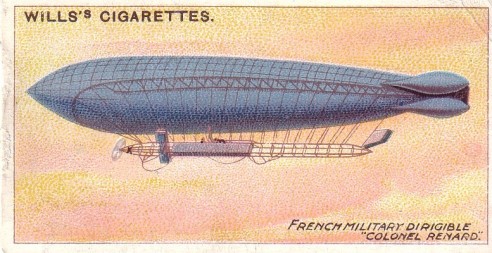 This Wills’s tobacco card is about a dirigible known as the Colonel Reynard, so I thought I would at least give you some background on just who the good Colonel was.

Colonel Charles Renard was a French military engineer, and with his brother Charles Renard and Arthur C. Krebs, in 1884 they constructed La France, a dirigible that first flew on August 9, 1884 at Chalais Meudon, France making a 23-minute circular flight.

This was the first time that a flying machine made a fight that returned to the place of take-off.

Renard is also known for his numbers, creating a now widely-used system of preferred numbers, which are standard guidelines for choosing exact product dimensions within a given set of constraints. Product developers must choose numerous lengths, distances, diameters, volumes, and other characteristic quantities. While all of these choices are constrained by considerations of functionality, usability, compatibility, safety or cost, there usually remains considerable leeway in the exact choice for many dimensions.)that was later named after him and became international standard ISO 3.

At the time, this numbering system helped the French Army reduce the number of different balloon ropes kept on inventory from 425 to 17, which I can only assume was a big deal.

One of the nice things about the Wills’s series on aviation from 1910 is that it took chances.

This card  – # 21 – there isn’t really a heck of a lot of information on the dirigible pictured on the card… perhaps because the French military dirigible, the Colonel Renard was indeed a military balloon, and the military has always liked to keep some things a secret. 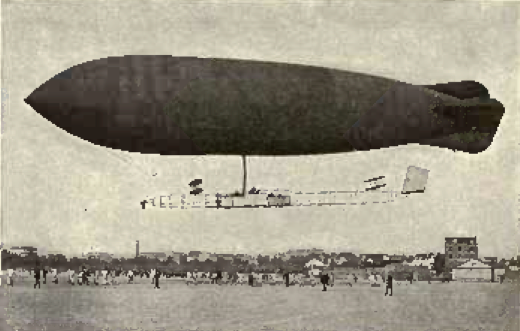 From what we do know about this dirigible, if we are to go by the manufacturer’s number – No. 5 – the Colonel Renard dirigible first flew in July of 1909, was sold to the French military in 1910 and renamed the Colonel Renard in honor of the builder of the first successful airship.

Constructed by Astra (Societe de Construction aeronautiques) at Billancourt, France, the company is a builder of pressure airships to the design of Edouard Surcouf and Henri Kapferer who built the car-girder type dirigible) and to the patents of M.L. Torres-Quevedo and the tension truss-type.

As the Will’s card notes, the Colonel Renard flew for the first time in 1909, in a flight that lasted about 40 minutes.

The general features of the Astra class are: Non-rigid, weights distributed by means of a long girder hung under the gas bags, a long nacelle, and inflated stabilizing shapes at the rear end of the balloon.

The Colonel Renard dirigible specifications are, confusing, as two rival know-it-all books (D’Orcy’s Airship Manual of 1917 and Jane’s All the World’s Aircraft 1913) seem to have different information:

Société Astra des Constructions Aéronautiques was a major French manufacturer of balloons, airships, and aeroplanes in the early 20th Century. It was founded in 1908 when Henri Deutsch de la Meurthe purchased Édouard Surcouf’s workshops at Billancourt.

Its most significant products were the Astra-Torres airships, but beginning in 1909, the firm also produced Wright brothers heavier-than-air designs under license. In 1912, these were supplanted by Astra’s own designs, the Astra C and CM.

Astra Clément-Bayard was established in 1908 by Astra and French industrialist Adolphe Clément-Bayard, to manufacture Airships at a new factory in La Motte-Breuil in response to a French Army decision to commence airship operations. Astra provided the envelope and Clément-Bayard provided the gondola and engine.

The Clément-Bayard No.1 airship was offered to the French government but was too expensive so it was bought by Tsar Nicholas II for the Russian army.

In 1921, the Astra Clément-Bayard firm was absorbed by Nieuport.

Andrew was born in London, UK, raised in Toronto, Canada, and cavorted in Ohtawara, Japan for three years. He is married, has a son and a cat. He has over 35,000 comic books and a plethora of pioneer aviation-related tobacco and sports cards and likes to build LEGO dioramas. Along with writing for a monthly industrial magazine, he also writes comic books and hates writing in the 3rd person. He also hates having to write this crap that no one will ever read. Along with the daily Japan - It's A Wonderful Rife blog, when he feels the hate, will also write another blog entitled: You Know What I Hate? He also works on his Pioneers Of Aviation - a cool blog on early fliers. He also wants to do more writing - for money, though. Help him out so he can stop talking in the 3rd person.
View all posts by mreman47 →
This entry was posted in Heavier-Than-Air, Lighter-Than-Air, Motors and Engines, People, Pilots, Tobacco Card and tagged Adolphe Clément-Bayard, Arthur C. Krebs, Astra Clément-Bayard, Astra-Torres, Charles Renard, Colonel Renard, Colonel Renard dirigible, D'Orcy's Airship Manual, French Dirigibles, Henri Deutsch de la Meurthe, Jane's All the World's Aircraft 1913, Nieuport, Panhard-Levassor motors, Paul Renard, Société Astra des Constructions Aéronautiques, Wright Brothers. Bookmark the permalink.