As you can see from their death dates, these fellows had conceived of something light years ahead of it actually occurring – passenger transport!

We’re talking about a passenger service for the 1840s… despite no one actually having flown a real heavier-than-air craft until the Wright Brothers did it at the turn of the 20th Century.

William Henson and John Stringfellow were involved in separate lace-making businesses, but got together to design a steam-driven aeroplane they called an ‘aerial steam carriage’—named ‘Ariel’.

Conceptually, it was to be a large passenger-carrying steam-powered monoplane featuring a wingspan of 45.72-meters (150-feet), and meant for inter-continental trips – not just hops around the British countryside.

Waitaminute! Did these guys really have lace-making businesses?

Yeah… I said lace… wanna make something of it? Like a doily? Sorry… personally, I think these guys were awesome in their efforts!

William Samuel Henson – while not a fan of the muttonchop ‘burns, I like his photo for some reason. Maybe because he’s looking at the camera with his head at an angle.

Henson received a patent for The Henson Aerial Steam Carriage in 1842—patent #9478—explaining the principle of the machine: “In order that the description hereafter given be rendered clear, I will first shortly explain the principle on which the machine is constructed.
If any light and flat or nearly flat article be projected or thrown edgewise in a slightly inclined position, the same will rise on the air till the force exerted is expended, when the article so thrown or projected will descend; and it will readily be conceived that, if the article so projected or thrown possessed in itself a continuous power or force equal to that used in throwing or projecting it, the article would continue to ascend so long as the forward part of the surface was upwards in respect to the hinder part, and that such article, when the power was stopped, or when the inclination was reversed, would descend by gravity aided by the force of the power contained in the article, if the power be continued, thus imitating the flight of a bird.
Now, the first part of my invention consists of an apparatus so constructed as to offer a very extended surface or plane of a light yet strong construction, which will have the same relation to the general machine which the extended wings of a bird have to the body when a bird is skimming in the air; but in place of the movement or power for onward progress being obtained by movement of the extended surface or plane, as is the case with the wings of birds, I apply suitable paddle-wheels or other proper mechanical propellers worked by a steam or other sufficiently light engine, and thus obtain the requisite power for onward movement to the plane or extended surface; and in order to give control as to the upward and downward direction of such a machine I apply a tail to the extended surface which is capable of being inclined or raised, so that when the power is acting to propel the machine, by inclining the tail upwards, the resistance offered by the air will cause the machine to rise on the air; and, on the contrary, when the inclination of the tail is reversed, the machine will immediately be propelled downwards, and pass through a plane more or less inclined to the horizon as the inclination of the tail is greater or less; and in order to guide the machine as to the lateral direction which it shall take, I apply a vertical rudder or second tail, and, according as the same is inclined in one direction or the other, so will be the direction of the machine.”

Along with Frederick Marriott and D.E. Colombine, Henson, Stringfellow formed the Aerial Transit Company in 1843 and between 1844-1847 began constructing smaller models of the design with the steam engine, but were not successful in their experimentation.

Frederick Marriott (c. 1805 – December 16, 1884) was a publisher, early promoter of aviation and creator of the Avitor Hermes Jr., the first unmanned aircraft to fly by its own power in the United States. He was described as “an English gentlemen, of eccentric habits, much shrewdness and enterprise, and entire originality” by the publisher of the newspaper Northern Indianian on March 19, 1874. Marriott is credited for inventing the term “aeroplane,” and intended to build an air transport system that would bring people from New York to California without the perils of the normal voyage of the 19th century. The company he formed (with Andrew Smith Hallidie) in 1866 was named the Aerial Steam Navigation Company.

Frederick Marriott is credited as the publisher of the San Francisco News Letter and California Advertiser, which was subtitled, “The Authorized Organ of the Aerial Steam Navigation Company”. One of the lead columns of the News Letter was named “Town Crier” and was written by Major Ambrose Bierce.[2]

The California China Mail and Flying Dragon was a Chinese language publication and one of the first sources of advertisements encouraging Chinese emigrants to work on the Western railway. It was subtitled, “Issued Every China Steamer Day.”

The California News Notes was illustrated and many of the woodcuts, typically depicting the linkages of various railway lines, remain popular with collectors.

As a publisher, Marriott was one of the first to print works from Mark Twain in his newspapers.

Marriott was responsible for the illustrations and publicity campaign for their planned airship, the “Ariel”. The airplane captured the imagination of the public and the company constructed and flew a small glider, but after a failure to build a larger working model and lacking funds, the company failed. Henson married and relocated to the United States, while Stringfellow continued aeronautical experiments.

Here’s and example of the model that Stringfellow built from Henson’s design:

A not-to-scale model of the Henson Steam Carriage, built by Stringfellow, seen here in 1848.

These guys were decent business men, and had the wherewithal to try and get investors in to the business…

A promotional pamphlet for all you prospective investors in the Aerial Steam Carriage.

As you can see from the promotional pamphlet above, the plan was for aeroplane to convey people from England to China and or India within a 24-hour journey. 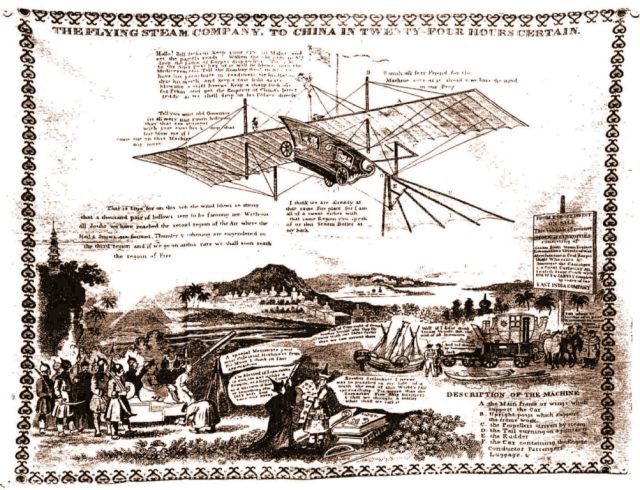 Here’s a silk scarf the lads had made up as a promotional piece… what? Not lace?

The concept for the aeroplane was ahead of its time… using concepts later aeroplane and airplane (ha!) designers would use to great success. Covered with fabric, the rectangular wings were curved on the top and bottom and were formed by wooden ribs attached to bamboo and hollow wood cylinder spars that tapered to the ends and covered with fabric. Just like the early aeroplanes in the early 1900s, the wings were braced with diagonal wires.

He and Stringfellow figured they would need a steam engine of 25- to 30-horsepower to drive two contra-rotating six-bladed propellers.

The design also featured a three-wheeled landing gear—something even the bicycle-building Wright Brothers failed to add to their aeroplane.

Although the Aerial Steam Carriage never took to the air, its design was very well thought-out and is recognized as an important part of early aeronautics.

All it needed as a stronger engine… which I am sure they could have built, but it also needed to be lighter… but that power to weight ratio wasn’t able to be built  for another 60 years… still, all in all, an excellent attempt.

Andrew was born in London, UK, raised in Toronto, Canada, and cavorted in Ohtawara, Japan for three years. He is married, has a son and a cat. He has over 35,000 comic books and a plethora of pioneer aviation-related tobacco and sports cards and likes to build LEGO dioramas. He has written and been an editor for various industrial magazines, has scripted comic books, ghost-written blogs for business sectors galore, and hates writing in the 3rd person. He also hates having to write this crap that no one will ever read. He works on his Pioneers Of Aviation - a cool blog on early fliers - even though it takes him so much time to do. He also wants to do more writing - for money, though. Help him out so he can stop talking in the 3rd person.
View all posts by mreman47 →
This entry was posted in Advertising, Concepts, Heavier-Than-Air, People, Tobacco Card and tagged Aerial Transit Company, The Henson Aerial Steam Carriage, Very early aviation attempt, William Samuel Henson. Bookmark the permalink.