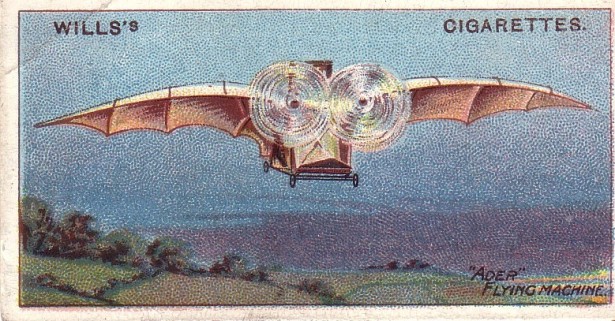 Clément Ader claims to have built and flown the first ever aeroplane to take off from its own power and fly—in 1890, some 13 years before the Wright Brothers.

In 1886, Ader began designing a heavier-than-air craft that was a steam-powered, bat-winged monoplane.

Designated the ‘Eole’, he believed it was more likely for a heavier-than air craft to fly if it was based on a form like a bird or bat, and gave his concept a wingspan of 14-meters (~46-feet), and weighing ~498.95-kilograms (~1,100-pounds) and powered it via a 20-horsepower steam engine that turned a single four-blade propeller tractor screw.

More patent drawings of the Eole.

According to the Wills’s card below, Ader discontinued his efforts to create a plane – but that’s not true.

He tried to duplicate his results with another plane, but there is little information available on that. Between 1894 and 1897 Ader built his third craft, a larger version of his first plane called the ‘Avion III’ (in English it means ‘Plane’, though it was better known as the ‘Bat’).

The ‘Bat’ was powered by two 20-horsepower steam engines that drove the two propellers. Built from wood, steel, brass and aluminum, the wing’s fabric was made from a silk pongee that covered its 15-meter (49.12-feet) wingspan.

On October 12-14, 1897, Ader demonstrated the ‘Bat’ in front of the French military on a specially prepared circular track. On October 12, General Mensier noted that the plane made a few hops but did not consider it a flight.

In 1910, some 13 years after the fact, a published statement from Ader was given in Paris: “After some turns of the propellers, and after traveling a few meters, we started off at a lively pace; the pressure-gauge registered about seven atmospheres; almost immediately the vibrations of the rear wheel ceased; a little later we only experienced those of the front wheels at intervals. ‘Unhappily, the wind became suddenly strong, and we had some difficulty in keeping the “Avion” on the white line. We increased the pressure to between eight and nine atmospheres, and immediately the speed increased considerably, and the vibrations of the wheels were no longer sensible; we were at that moment at the point marked G in the sketch; the “Avion” then found itself freely supported by its wings; under the impulse of the wind it continually tended to go outside the (prepared) area to the right, in spite of the action of the rudder. On reaching the point V it found itself in a very critical position; the wind blew strongly and across the direction of the white line which it ought to follow; the machine then, although still going forward, drifted quickly out of the area; we immediately put over the rudder to the left as far as it would go; at the same time increasing the pressure still more, in order to try to regain the course. The “Avion” obeyed, recovered a little, and remained for some seconds headed towards its intended course, but it could not struggle against the wind; instead of going back, on the contrary it drifted farther and farther away. And ill-luck had it that the drift took the direction towards part of the School of Musketry, which was guarded by posts and barriers. Frightened at the prospect of breaking ourselves against these obstacles, surprised at seeing the earth getting farther away from under the “Avion,” and very much impressed by seeing it rushing sideways at a sickening speed, instinctively we stopped everything. What passed through our thoughts at this moment which threatened a tragic turn would be difficult to set down. All at once came a great shock, splintering, a heavy concussion: we had landed.”

The Avion III – The Bat – at the Musée des Arts et Métiers in Paris.

Ader and his friends alleged that a flight of nearly a thousand feet in distance was made; again the machine was wrecked at the end of the trial, and there Ader’s practical work may be said to have ended, since no more funds were forthcoming for the subsidy of experiments, which had been provided to Ader from the French military.

Are there reports from the military witnesses supporting this event? If so, the Author has not found them as of this writing. As well, if a flight did occur—even a minor succes—surely it would have spurred on further development, with more monies coming from the military.

The reader may make up his or her own mind on this matter, but the evidence and lack of evidence is damning.

A report notes that General Mensier wrote on October 14, 1897—the same day of Ader’s efforts—that Ader was not successful in his attempts at heavier-than-air flight.

Andrew was born in London, UK, raised in Toronto, Canada, and cavorted in Ohtawara, Japan for three years. He is married, has a son and a cat. He has over 35,000 comic books and a plethora of pioneer aviation-related tobacco and sports cards and likes to build LEGO dioramas. Along with writing for a monthly industrial magazine, he also writes comic books and hates writing in the 3rd person. He also hates having to write this crap that no one will ever read. Along with the daily Japan - It's A Wonderful Rife blog, when he feels the hate, will also write another blog entitled: You Know What I Hate? He also works on his Pioneers Of Aviation - a cool blog on early fliers. He also wants to do more writing - for money, though. Help him out so he can stop talking in the 3rd person.
View all posts by mreman47 →
This entry was posted in Aviation Art, Firsts, Heavier-Than-Air, Research, Tobacco Card. Bookmark the permalink.