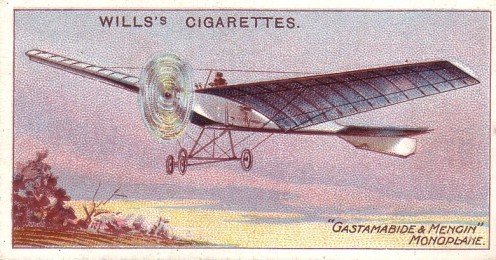 When I first starting getting a hold of these Wills‘s aeroplane cards, I did so only because I was writing a magazine article about Canada’s first aeroplane – a century retrospect of The Silver Dart, and as such, I knew nothing at all about aviation save that it was the Wright Brothers who created it all.

Obviously I was wrong, as my research into the history of aviation seen here in this blog has taught me.

The 50-card collection I amassed also taught me that despite bi-planes and tri-planes being the norm in WWI, monoplanes had actually been created at around the same time… and for some reason the concept of single wing craft (monoplanes) was deemed the less successful way. Obviously time has proven the viability of monoplanes over the now unused designs involving bi-planes et al.

To start, regardless of this Wills’s card #34, the proper spelling for this particular craft is, as follows: ‘Gastambide-Mengin I’. The ‘&’ is incorrect. There is also a Roman numeral I included.

The ‘Gastambide-Mengin I’ is a monoplane designed and built by by Léon Levavasseur and fitted with a 50-hp Antoinette engine—the Antoinette motor would become the premier engine for aviators during the very early years of heavier-than-air flight.

The tractor (propeller at the front) monoplane was first flown on February 8, 1908 at Issy-les-Moulineaux, France by Monsieur (first name?) Boyer, a mechanic for the firm Gastambide-Mengin, and flew for several meters that day.

Note the spelling of the key individual of this card: Léon Levavasseur – what I have is correct. The card is wrong It’s not even close, really. It also messed me up when I was researching this card..

This Wills’s card celebrates the achievement of the Antoinette motor, so here’s some background information on it:

The Antoinette began as a private venture led by Levavasseur and financed by Jules Gastambide, who owned an electricity generating station in Algeria.

When vacationing together in 1902 and discussing the possibility of fabricating light engines for aviation, Levavasseur suggested naming those engines after Gastambide’s daughter Antoinette.

With Gastambide financing things, Levavasseur built and patented a new type of engine called a V-8 that was both light and powerful and now known as the Antoinette.

Later features of the Antoinette engines would include direct fuel injection and evaporative engine cooling.

By 1904, most of the prize-winning speedboats in Europe were powered with Antoinette engines. During this time, he designed engines of various configurations of up to 32 cylinders. 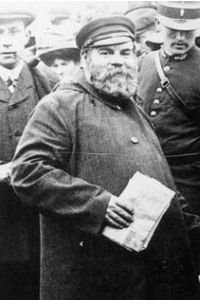 The partnership was eventually  incorporated as Antoinette in 1906 with Gastambide as president, Levavasseur as technical director and Louis Bleriot (see Wills’s card #38) as vice-president.

The company’s primary business was to be the sale of engines to aircraft builders, but when the company decided to begin constructing aircraft, Bleriot quit arguing that they were now going into direct competition with their own customers.

Although speed boats and cars utilized the motors, Antoinette was the primary source for aviators, with Alberto Santos Dumont (see Wills’s card #33) using it on his ‘14-bis’, and Gabriel Voisin bi-plane (see Wills’s card #37) that was flown by Henri Farman (see Wills’s card #41) who used it to fly the first one-kilometer circular flight in Europe in January of 1908.

In 1907, Levavasseur was the designer behind the ‘Gastambide-Mengin I’ monoplane, and it was this design which formed the basis of his successful and elegant ‘Antoinette IV’ of 1909.

In the spring of 1909, Antoinette pilot Hubert Latham made several impressive flights. This convinced Levavasseur that Latham could cross the English Channel in an Antoinette aircraft and win the Daily Mail prize for doing so. Latham made two attempts to cross the English Channel in July 1909, both of which were unsuccessful due to engine failure while over the Channel. Between Latham’s attempts, former Antoinette vice-president Blériot successfully crossed the Channel in his own aircraft. That month, Levavasseur was made a Chevalier of the Legion of Honour. 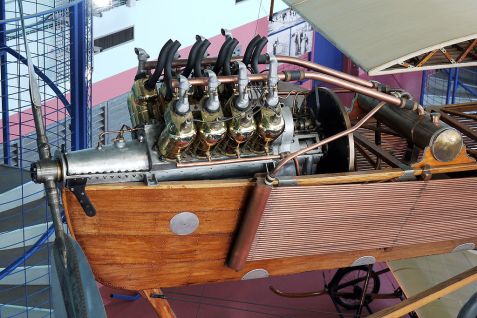 An Antoinette fuel-injected V8 aviation engine of 1909, mounted in a preserved Antoinette VII monoplane aircraft at the Museum of Air and Space Paris, Le Bourget (France). Image by Pline.

Latham’s efforts to promote Levavasseur’s Antoinette products were more successful at the Grande Semaine d’Aviation de la Champagne on August 22–29, 1909 at Reims, France, where he won the altitude prize, finished second in the speed competition, took third place in the Gordon Bennett Cup for aeroplanes, and, in the Grand Prix event, trying to fly the longest distance around the circuit in a single uninterrupted flight, he won second prize in one aircraft (an Antoinette IV) and fifth prize in another (an Antoinette VII). See HERE and HERE for a full story on this aviation event.

Levavasseur left the Antoinette company in November of 1909, but returned in March of 1920 as its technical director.

It was then that he tried to design a military monoplane known as the Monobloc Antoinette – a streamlined monoplane with cantilever wings. But, it was too heavy and has a weak engine and was unable to take off during the 1911 military trials held at Reims. This failure would eventually lead the Antoinette company into bankruptcy.

On his own, Levavasseur began working on an aircraft with variable wing surface in late 1918. The variable area wing design won Levavasseur a “Safety in Aeroplanes” prize and was later acquired by the French government.

Levavasseur died in poverty in February 1922.

Andrew was born in London, UK, raised in Toronto, Canada, and cavorted in Ohtawara, Japan for three years. He is married, has a son and a cat. He has over 35,000 comic books and a plethora of pioneer aviation-related tobacco and sports cards and likes to build LEGO dioramas. He has written and been an editor for various industrial magazines, has scripted comic books, ghost-written blogs for business sectors galore, and hates writing in the 3rd person. He also hates having to write this crap that no one will ever read. He works on his Pioneers Of Aviation - a cool blog on early fliers - even though it takes him so much time to do. He also wants to do more writing - for money, though. Help him out so he can stop talking in the 3rd person.
View all posts by mreman47 →
This entry was posted in Aviation Art, Firsts, Heavier-Than-Air, Motors and Engines and tagged Antoinette Gastambide, Antoinette motors, direct fuel injection origins, early monoplane craft, evaporative engine cooling, First V-8 Engine, Jules Gastambide, Léon Levavasseur. Bookmark the permalink.