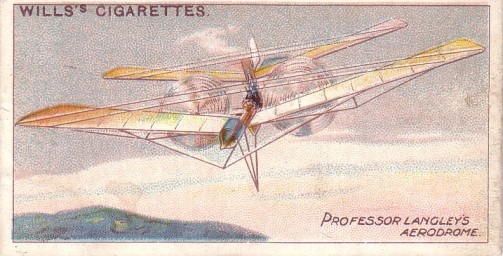 Samuel Pierpont Langley was an astronomer, physicist, inventor and a pioneer of aviation. In other words, he was one bloody smart dude.

He invented something called a bolometer. and not being as smart as Langley, I had to look it up: a bolometer is a device for measuring the power of incident electromagnetic radiation via the heating of a material with a temperature-dependent electrical resistance. Langley invented the bolometer in 1878, and it is very much in use today.

First and foremost, Langley was an astronomer.

After graduating from some very posh schools, Langley worked as an assistant in the Harvard College Observatory. He moved to work as a professor of mathematics at the United States Naval Academy, but his main job was to restore the small observatory there.

In 1867, he became the director of the Allegheny Observatory and a professor of astronomy at the Western University of Pennsylvania, now known as the University of Pittsburgh, a post he kept until 1891 even while he became the third secretary of the Smithsonian Institution in 1887. Langley was the founder of the Smithsonian Astrophysical Observatory.

I wanted to be an astronomer until I learned I would have to work nights. Seriously. I had never thought about that before my second-year of university. I opted out when I thought I would never have a proper social life, and women were more important than the non-curvy heavenly bodies.

Prior to 1867, the exact time had only occasionally been sent from American observatories for public use…

On the railroads… knowing the exact time was necessary, as a slow watch could have two trains running in opposite directions on the same track…

So… using astronomical observations obtained from a new transit telescope he built to observe the position of stars as they crossed the celestial median, Langley devised a precise time standard – including time zones – that became known as the Allegheny Time System.

He broadcast time signals to Allegheny businesses and to the Pennsylvania Railroad… and twice a day the correct time was sent along 4,713 miles of telegraph wire to railroads all across the U.S. and Canada.

For a guy who spent much of his time looking up into the sky, it was only a matter of time before Langley set this brain on solving heavier-than-air flight.

Beginning in 1887, Langley began to experiment with gliders and rubberband-powered models…

He then built larger flying model craft powered by miniature steam engines… and it worked. Apparently the key to sustainable flight (in the model) was when he discovered that a 1 lb. brass plate suspended from the rotating arm by a spring, could be kept aloft by a spring tension of less than 1 oz.

I’ll take his word for that…

On May 6, 1896, Langley’s Number 5 unpiloted model flew nearly 3/4 of a mile after a catapult launch from a boat on the Potomac River. 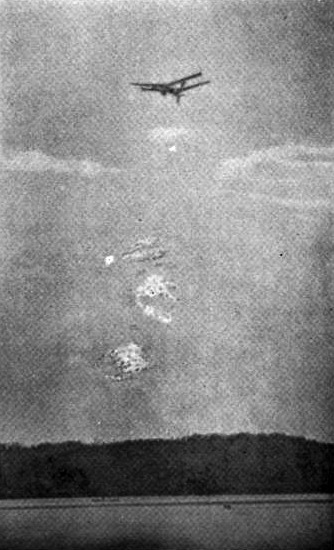 This test flight, ably captured in the photo above by Alexander Graham Bell (yes, that guy), was 10 times longer than any other previous experiment with a heavier-than-air machine.

Quarter-sized model of Langley’s Model Number 5 in flight on August 8, 1903.

The U.S. War Department took notice and provided him with a grant of US$50,000, with the Smithsonian adding another $20,000 to create a piloted aircraft he called the Aerodrome, but history politely calls the Langley Aerodrome. 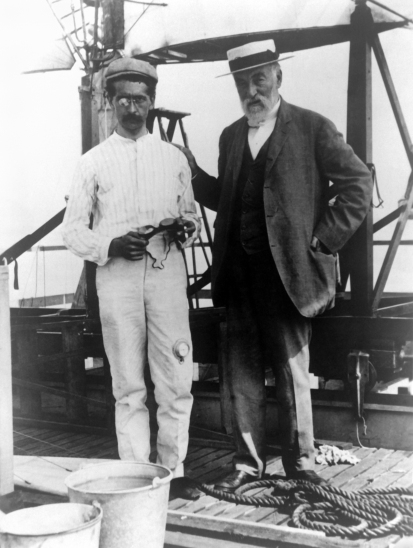 Charles Manly (left) and Samuel Langley. Manley has his pilot’s googles in hand, and a compass attached to his pants above his knee so he can figure out his direction when seated in the Aerodrome.

While the full-scale Aerodrome was being designed and built, the internal combustion engine was contracted out to manufacturer Stephen Balzer (1864–1940). When he failed to produce an engine to the power and weight specifications, Manly finished the design creating an engine with more power than the one the Wright Bros. used on their airplane: 52 hp vs 12hp.

The Aerodrome had wire-braced tandem wings (one behind the other). It had a Pénaud tail for pitch and yaw control but no roll control, depending instead on the dihedral angle of the wings, as did the models, for maintaining roughly level flight. Very roughly.

The Wright Brothers would eventually fly a very controllable airplane that could fly against the wind and land on solid ground… but the Langley model… for safety’s sake he built his aircraft catapult onto a houseboat on the Potomac River, as it lacked a landing gear. 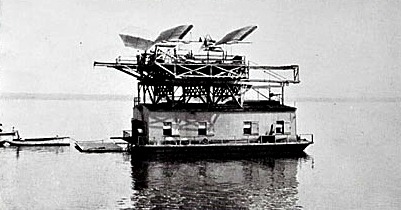 Langley’s Aerodrome and catapult aboard the houseboat on the Potomac River. 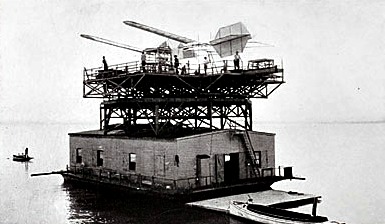 Another view of Langley’s Aerodrome and catapult aboard the houseboat.

Langley knew that even if successful, the landing would mean a partial or total rebuild of the craft. Still… the water seemed like a softer alternative to the harder ground.

The first test flight of Langley’s Aerodrome occurred on October 7, 1903.

Keep in mind that the Wright Bros. achieved their success on December 17, 1903. Back in 1902, glider designer extraordinaire Octave Chanute (see Wills’s card #32) heard about the Wright Brother’s success with gliders and informed his buddy Langley.

Langley attempted to contact the Wright’s, but was politely rebuffed, as they were highly secretive.

Anyhow… on the first test flight on the Potomac, the aircraft, according to Langley, clipped a wing on part of the catapult and dumped the craft into the river “like a handful of mortar.” Manley was unhurt and picked up from the river. 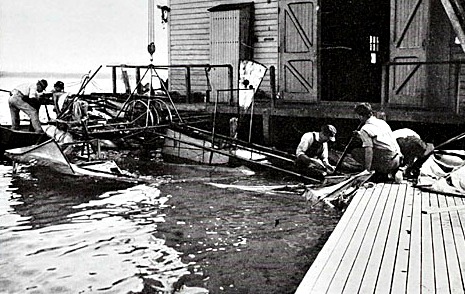 Picking up the pieces after the Aerodrome’s disastrous first flight attempt on October 7, 1903.

After rebuilding the aircraft and slight changes to the catapult, the Langley Aerodrome made its second test flight on December 8, 1903. 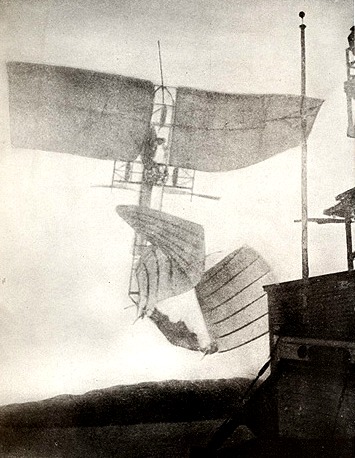 Missed it by that much. Already in distress on its second flight attempt, the Aerodrome is about to plunge into the Potomac River on December 8, 1903.

Upon take-off, the airplane once again pitched into the river leaving a shaken Manly to once again to tread water for a while after being trapped underwater for a short time (a plane did fall on him, after all).

I should mention that Langley wasn’t afraid of the press, and as such there was plenty of it around for each test.

Needless to say, the press roasted him quite well, and remained a source of derision for quite a long time afterwards.

In fact, in 1914 famed aviation pioneer Glenn Curtiss flew a modified version of the Langley Aerodrome for a few hundred feet as part of his attempt to fight the Wright Brother’s airplane patent and to help the Smithsonian resuscitate Langley’s damaged reputation.

That patent fight revolved around the manner of controlling an aeroplane’s flight control. That the patent war stalled the American aviation industry can not be denied.

While the Wright Brothers sued foreign and domestic aviators and aviation companies… including Glenn Curtiss.

Andrew was born in London, UK, raised in Toronto, Canada, and cavorted in Ohtawara, Japan for three years. He is married, has a son and a cat. He has over 35,000 comic books and a plethora of pioneer aviation-related tobacco and sports cards and likes to build LEGO dioramas. He has written and been an editor for various industrial magazines, has scripted comic books, ghost-written blogs for business sectors galore, and hates writing in the 3rd person. He also hates having to write this crap that no one will ever read. He works on his Pioneers Of Aviation - a cool blog on early fliers - even though it takes him so much time to do. He also wants to do more writing - for money, though. Help him out so he can stop talking in the 3rd person.
View all posts by mreman47 →
This entry was posted in Concepts, Firsts, Heavier-Than-Air, Motors and Engines, People, Pilots, Tobacco Card and tagged Alexander Graham Bell, Glenn Curtiss, Langley's Aerodrome, Octave Alexandre Chanute, Stephen Balzer, Wright Brothers. Bookmark the permalink.