Kimball… that’s what the front of the card says… and after a perusal of the reverse of the card, I came away knowing very little about what the Kimball was, let alone who built the formidable aeroplane with eight motors.

… the thing is… there’s a much more famous Kimball in aviation history… the guy who helped design the Super Gee, my favorite buzz bomb speed racing aircraft of the 1930s. But apparently not the same guy.

The Kimball of Card #48 is a bit more elusive an individual, as perhaps these last few cards created for the 50-card Wills’s Aviation series, were late additions… and as such, not as much historical data had been compiled by the people putting the set together.

Try typing in Kimball airplane into Google and not much relating to this card appears – except for images depicting this card. That would imply the plane never flew… but let’s find out for sure.

Still, the card is correct on the reverse… the aeroplane is not called “Kimball” but rather “New York“. 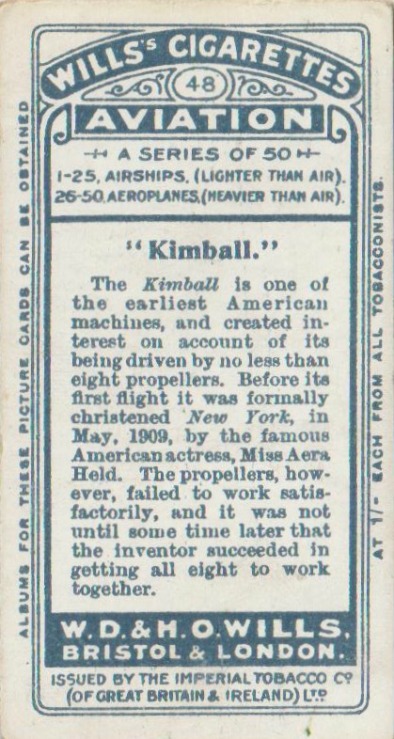 Anyhow, from what I can determine, Wilbur Kimball is actually better known for his building of the very first helicopter in the United States.

According to a newspaper article published at the time of his death, Kimball was more into electrical components than aviation—or at least was more successful with electrical.

He was an aide to Alexander Graham Bell, the creator of the telephone.

He was a helper to Thomas Edison who devised the phonograph amongst his hundreds of inventions.

He devised a system for underground transmission of power.

However, he was also an early pioneer of aviation, particularly with helicopter design, and was a member of the Aeronautic Society in New York.

As mentioned, the Kimball Helicopter of 1908 was his first big attempt at aviation. With it, we can first see his penchant for having lots of propellers with his machines.

The helicopter’s vertical thrust came from the 24 small four-bladed propellers that were all driven by a single, central engine.

He decided to test it out in the public’s eye in Belmont Park in New York, but it failed to fly.

Next, Kimball decided to create a non-powered glider… his first aerodynamic testing to achieve flight with a more conventional aeroplane design.

Here’s what the New York Times newspaper dated March 30, 1909 had to say about this:

Aeronaut had a bad fall.
Kimball’s New glider turned turtle when the wind caught it.
Wilbur R. Kimball, one of the leading members of the Aeronautic Society, received the congratulations of his friends yesterday over his narrow escape last Saturday at Morris Park from serious injury. Mr. Kimball who had just completed a large aeroplane on novel lines, made his first venture in his new gliding machine, which he built for experimental flights before making an effort to get his aeroplane in the air.
He used the catapult at Morris Park which shoots the glider along a mono rail, the force coming from a heavy weight dropped from a perpendicular. A strong wind was blowing, and in his second trial, when about thirty feet in the air, the wind hurled the glider back, tipping it completely over. It fell with great force on the rail. The glider was smashed, and Mr. Kimball was badly bruised about the back and head. He said yesterday that he did not know when he would renew his aerial experiments.

When I read the description of the catapult to launch the glider, it made me think of the Wright Brother’s and their wheeless Wright Flyer that – along with the motor – propelled the aircraft into the air.

Hey, at least Kimball got the glider into the air…but why the heck does the newspaper article state that Kimball has already built an aeroplane, and that he’s doing this glider test to make sure his plane can fly?

Shouldn’t you do the test first, and then construct an aircraft dependent of those results?

This could explain a lot.

Then came the eight-propeller driven aeroplane – another very public event with a movie star present, as well as the press.

But… in a news article of the day, it mentioned that this aeroplane was Kimball’s second.

The first never got off the ground – but it was publicized… so I assume that Kimball No. 1 was more than likely the airplane Kimball had built just before his glider incident.

According to another New York Times article of 1909 (not sure of the month):

“A previous model, with six propellers, never got off the ground at its much-publicized unveiling at Morris Park.”

But, ever the showman, Kimball decided to unveil his latest aircraft with much media fanfare and a famous New York actress of the day.

Building up to the event months in advance, the New York Times of March 12, 1909 wrote:
Anna Held to name an airship.
Anna Held, it was announced yesterday, will name Wilbur R. Kimball’s big aeroplane “New York No.1” at Morris Park. The machine was built at Morris Park under the direction of the American Aeronautic Society, and several short flights have been made in it by officers of the society. After naming the aeroplane, Miss Held will take a trip in it with Mr. Kimball.

By the way… Morris Park, as you can see from the photo a few paragraphs below, was a horse race track in the Bronx, New York.

It was named after John Albert Morris (July 1836 – May 25, 1895), an American businessman widely known as the “Lottery King” and a prominent figure in the sport of thoroughbred horse racing. He built the Morris Park Racecourse, which existed from 1889 until 1910… so just one more year after the event above took place.

In 1890 the Morris Park Racecourse hosted both the Preakness and the Belmont Stakes,  the latter continued to be run there until 1905.

The track was later used for auto racing and was the site of the first public air show – which is what is going on with Kimball and his plane.

After a 1910 fire, the property was divided into lots for the current neighborhood. Several streets in the Morris Park area including Cruger, Holland, Radcliffe, Colden, Paulding, and Hone Avenues, are named after 18th and 19th century mayors of New York City.

Back to Kimball… from what I understand, Anna Held was a pretty and famous actress who was part of the Ziegfield Follies. Va-va-voom. There’s a photo of her way down this article. 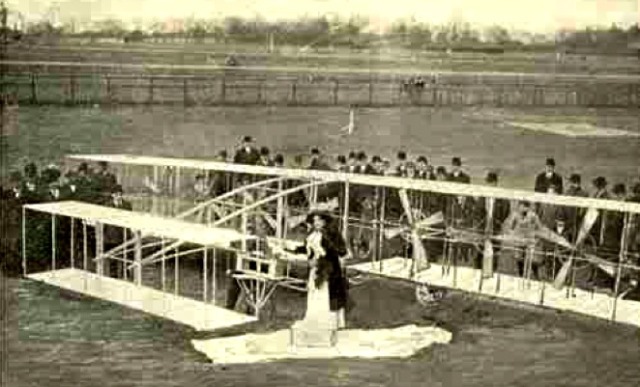 As for the biplane, let’s call it Kimball No.2/New York No. 1, here’s a description of it from the New York Times:

Among the many aeroplanes which are being built in the United States, a very interesting one is the Kimball biplane. The two main planes are of 37 ft. spread, have a depth of. 6i ft., and are placed 4 ft. 2 ins. apart. There is a biplane elevator in front, but no rear rudder, although at the ends of the two main planes are controllable extensions measuring 4 ft. by 4 ft. At each end the rear edges of the main planes are connected by a shutter of the Venetian blind type, which can be manipulated by the aviator for steering purposes. The aeroplane is to be propelled by eight large propellers placed between the planes and driven by an endless steel cable, the power being furnished by a 40-h.p. two-cycle engine.

I believe this is a close-up of Kimball No. 2 – but it seems to have been taken at the same time as the headshot above (same hat, same windy tie/cravat… and same man to the right wearing the same clothes) … and THAT photograph claims to have been 1911… meaning this is another aeroplane he was working on, or he was still attempting to get his Kimball No. 2 up in the air to impress the very pressable actress Anna Held.

Okay… the way I read that, is that all of the propellers are connected to the motor by one really long piece of steel cable.

Steel is pretty heavy… but even if it could work, if that steel cable should break from stress or friction, every single propeller on that plane would all at once fail to receive power from the one motor.

All I can say is: Ms. Held… don’t go on a aeroplane journey in this plane!

Those moveable things on the wing tips seem similar to an aileron for side to side control, but I’m unsure how effective it would actually be.

So… what happened to Kimball No.2/New York No.1?

Wilbur R. Kimball’s new eight-propeller aeroplane gave evidence of being a real bird of flight yesterday … [ ] … something went wrong with the steering gear, and instead of keeping in the middle of the roadway the aeroplane skidded over the two or three foot bank bordering the track, finally stopping in a damaged condition.

Thank goodness the then 38-year-old Held wasn’t part of this debacle. 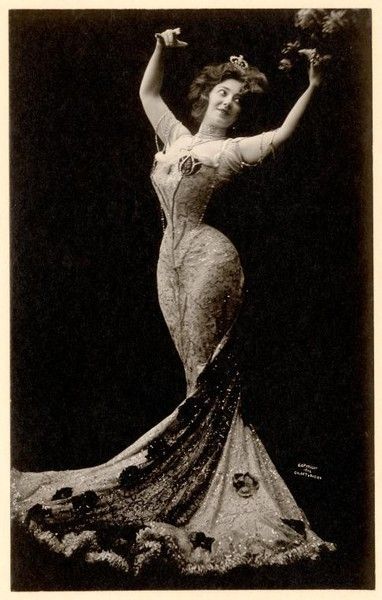 Want to know about Anna Held – the common-law wife of Mr. Ziegfield himself? Click HERE.

Here’s what we know about that infamous steel cable:
Transmission is effected by means of a small steel endless cable. This cable, which is only one-eighth of an inch in diameter is composed of 114 fine wire threads twisted in six strands of nineteen wires each, and is as flexible as a silken cord. Its tensile strength is 2,000 pounds. Tests have shown that a pull of only 80 to 90 pounds is sufficient to turn the propellers.

Hmm… so it should have worked. Then again… it depends on the aeroplane’s sturdiness of construction, its power to weight ratio, its center of gravity, aerodynamics, and so much more.

Anyhow… if there’s more information out there on Wilbur Kimball, it’s probably in books or other newspapers that I currently do not have access too… and because I’m writing a blog, not a novel. He doesn’t appear to have gotten his aeroplanes off the ground – despite the drawing on our Wills’s aviation card.

Kimball died at a good old age on July 30, 1940 at St. Luke’s Hospital in Manhattan, and is buried in Woodbrook Cemetery in Woburn, Massachusetts.

Andrew was born in London, UK, raised in Toronto, Canada, and cavorted in Ohtawara, Japan for three years. He is married, has a son and a cat. He has over 35,000 comic books and a plethora of pioneer aviation-related tobacco and sports cards and likes to build LEGO dioramas. He has written and been an editor for various industrial magazines, has scripted comic books, ghost-written blogs for business sectors galore, and hates writing in the 3rd person. He also hates having to write this crap that no one will ever read. He works on his Pioneers Of Aviation - a cool blog on early fliers - even though it takes him so much time to do. He also wants to do more writing - for money, though. Help him out so he can stop talking in the 3rd person.
View all posts by mreman47 →
This entry was posted in Failures, Heavier-Than-Air, Helicopters, Tobacco Card and tagged Anna Held, Kimbal New York No. 1 biplane, Kimball biplane, Kimball Helicopter, New York Times, Ziegfield Follies. Bookmark the permalink.