The reverse of this Card #49, says that as of the time of this card – December 1909 – well… at least we have a proper date for the Rickman helicopter – no great results have occurred.

The card’s descriptive is quite exaggerated, calling the Rickman Helicopter one of the strangest flying machines ever built in America, which is saying a lot. Yet they still believed it to have promise. 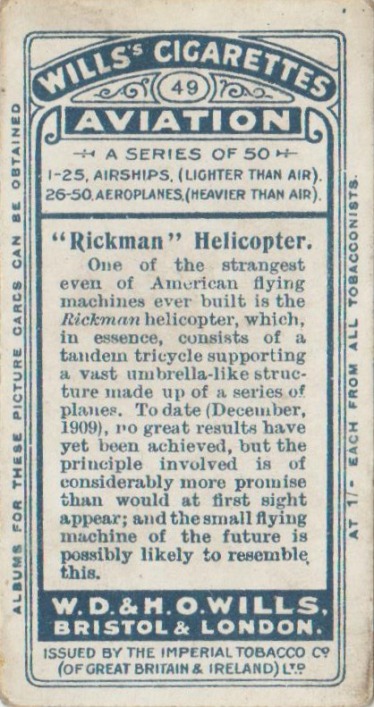 What we can determine, is that Wills’s believed there might actually be some hope for success for this flying machine… or they thought it sucked and were running out of time and needed to fill the space for Card #49 in the aviation series.

It’s quite obvious that the last few cards in this series have been lacking in true success stories, but are at least for the 1910 smoker/aviation card collector, a look at fairly recently-designed aviation machines.

It was 1910… who the heck knew in advance what could fly? Bleriot, Farman, Curtiss and the Wright Brothers… so five men on the planet knew how to properly design airplanes that could fly. I know that’s not a true number, but the point is few people really had a proper idea of what it took aerodynamically to sustain a heavier-than-air craft.

Since we don’t know who Rickman is… and we don’t have a photograph of him… except there’s this:

According to those in the know, the above is a real photograph of the Rickman Helicopter.

So… if that’s true, we could assume that one of the three dapper men behind the tandem bicycle is “Rickman”… but which man? Considering that the tandem bicycle requires two pedal pushers… and the two men in center and left are wearing matching bowties… we could assume they are the power, while the man on the right in the necktie is the designer and manufacturer… Mr. Rickman.

You’ll note that the man on the right does not have a matching hat either, and has his shirt sleeves down – where the other two have them rolled and clipped at the elbow.

I’m extrapolating… and might be full of hot air, but it’s a possibility.

So… with very little information on just who Rickman is, I turned to the library… or in my case, a librarian, who directed me to: my new friends over at the American Helicopter Society (AHS) International Helicopter History Facebook site: @HeloHistory, who have come through in a huge way. See their website at www.vtol.org.

They contacted the Smithsonian’s National Air & Space Museum via the AHS History Committee, who dug up a newspaper article from the Saturday, October 4, 1930 newspaper The Brooklyn Daily Eagle of Brooklyn, New York.

We have the only known on-line description of Franklin E. Rickman!

We now also know that as of 1930 – 22 years after the original Rickman Helicopter concept – that he hadn’t given up on a pedal-powered helicopter. Thing is… as of 2016, we know that conceptually it works. See below…

So… my librarian buddy—used www.Ancestry.com to find out more information based on the newspaper article above.

My librarian says that the latest record he could find of Franklin E. Rickman alive was via the 1940 U.S. Census… alive and well and living in Queens, NY.

He says that the 1950 U.S. Census records are still sealed until 2022, as individual records are sealed for 72 years. The United States does a full census every 10 years.

We could not find a death date in the records.

Do you have any idea how incredible ‘discovery’ makes one feel… knowing that you, dear reader are now amongst a handful of people who know a bit of history that was ‘misplaced’?

Wow.  Thanks, Smithsonian! Thanks, http://www.newspapers.com! Thanks,  AHS Helicopter History Facebook site: @HeloHistory !!! And… thanks Vinnie for being the best librarian I’ve ever known!

We could assume that Rickman designed the helicopter in 1908 and getting funds to build his creation then, but didn’t complete it until 1909.

The Rickman Helicopter was essentially a tandem tricycle (two wheels on the rear perhaps to lend the machine more balance), that when pedaled by two riders, the pedal power was transmitted via bevel gear and shaft to an overhead multi-bladed rotor.

The umbrella-like covering measured approximately 4.5 meters (14.76 feet) in diameter, and actually revolved—as opposed to being pushed up and down like an umbrella opening and closing.

Rickman and his two cyclists with big thighs and calves, we hope, demonstrated the machine over at the Belmont Park racetrack in Long Island… or was it the old Morris Park race course in New York… I would say the latter, thanks to newspaper evidence.

Since there a dearth of information on Rickman, we can correctly assume that the “helicopter” never left the ground.

So… what happened next? Well… according to a newspaper article from the December 5, 1909 issue, page 29 of the The Sunday News from Charleston, South Carolina:

“… at the old Morris Park race course, New York… A Mr. Rickman built a helicopter with thirty-two propellers, forming a sunflower shaped parachute. It’s skeleton hangs in the loft of the workshop.”

As for the Wills’s card’s hope that the Rickman Helicopter might be the shape of things to come in the future… probably not.

It’s a plane, not a helicopter… but if we want an example of a human powered helicopter like the Rickman Helicopter, we could look at the Barney-copter:

Or, you could see the real live version when you read my article HERE.

Also (thanks to Mike Hirschberg at www.vtol.org) there was AeroVelo, Inc. who won  its Igor I. Sikorsky Human Powered Helicopter Competition (HPH) for the first time since the Society established it 33 years ago. See HERE.

My version is right HERE, too.

You can even see an autograph (signature) of Franklin E. Rickman in the drawing accompanying the patent below!

See the patent below:

Because we now know that as of 1930 he was an employee of the New York City Water Department, I figured what the heck… I contacted the New York Government offices seeking a death date for Franklin E. Rickman… if they choose to help, they might have a record as to WHEN they stopped his pension payments owing to his passing.

I do have a ‘confirmation’ of request number from them… but, as of December 8, 2016, I have not yet heard back from the New York Government.

Worth a shot, right?  We already know more about Rickman than at anytime since he was alive… or at least 1930. 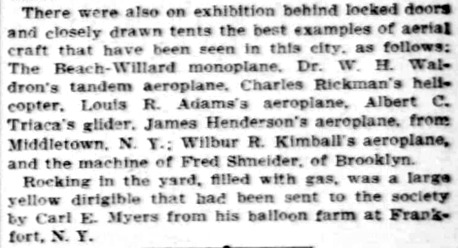 And then… there’s the June 14, 1909 newspaper clipping from the New York Tribune newspaper – above. I found this a few days after I discovered all the other data.

If you give it a read, you’ll notice that the Rickman helicopter is mentioned…. they even offer his first name… Charles Rickman.

Considering that the 1930 newspaper article that mentioned his name was Franklin E. Rickman, provided his place of business and home address, and mentioned his current helicopter was a continuation of work he did previously in 1908/09… I’m going assume that the other article I just found has incorrect data.

Of course… if one newspaper article could get something as simple as a first name incorrect, whose to say that another such article couldn’t have incorrect data, too?

Being an ex-newspaper guy myself, I want to believe that journalist mistakes are far and few between.

We can agree that the New York Tribune was correct in Rickman having a helicopter at an event in 1909, but that the reporter may not have received the correct information because they didn’t talk to the direct source.

If anyone has more information to share on the life and times of Franklin E. Rickman, please contact me at mreman@rogers.com. Cheers.

Andrew was born in London, UK, raised in Toronto, Canada, and cavorted in Ohtawara, Japan for three years. He is married, has a son and a cat. He has over 35,000 comic books and a plethora of pioneer aviation-related tobacco and sports cards and likes to build LEGO dioramas. He has written and been an editor for various industrial magazines, has scripted comic books, ghost-written blogs for business sectors galore, and hates writing in the 3rd person. He also hates having to write this crap that no one will ever read. He works on his Pioneers Of Aviation - a cool blog on early fliers - even though it takes him so much time to do. He also wants to do more writing - for money, though. Help him out so he can stop talking in the 3rd person.
View all posts by mreman47 →
This entry was posted in Aviation Art, Concepts, Failures, Heavier-Than-Air, Helicopters, People, Research, Tobacco Card and tagged AeroVelo Inc., AHS Helicopter History, Barney-copter, Betterfly, Early helicopter failure, Igor I. Sikorsky Human Powered Helicopter Competition (HPH), newspapers.com, Rickman helicopter, Smithsonian’s National Air & Space Museum, The Brooklyn Daily Eagle. Bookmark the permalink.