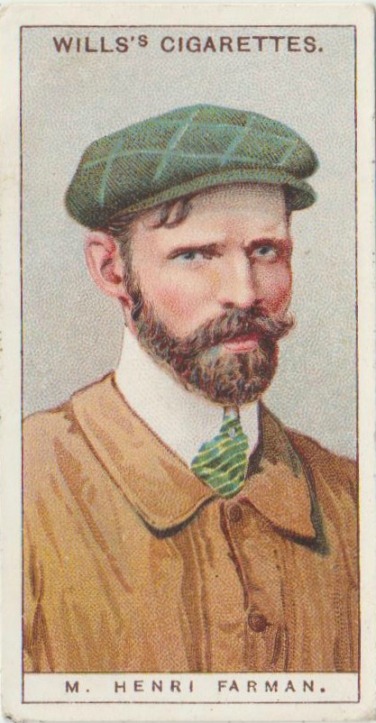 Because Henri Farman was one of the more famous, and rightly-so, pioneers of aviation he appears multiple times in the card series, as well as referenced by myself in the whole Pioneers Of Aviation blog site.

An excellent such example is HERE Card #41 of the series.

As such, why reinvent the wheel? I’ve borrowed heavily from that blog article.

Henry Farman was born in Paris, France—but his family was British… so depending on who is doing the recollecting, Farman’s name is either Henry (British) or Henri (French).

Because his family was British and living in France, I would suspect that Henri was born as Henry… but in order to fit in with the French children, probably became Henri at some point in time.

Actually, Farman’s dad was British, and his mother was French… but with Europe being highly patriarchal in those days, what the father said is all that mattered.

So… no matter how French Farman may have thought he was with his cool “Henri” name, Farman’s dad said he was British.

As such, Henri/Henry Farman was actually a British citizen until he finally became an ‘onest-too-gosh Frenchman in 1937…. just in time to become German a couple of years later (if you know your European history).

Farman’s British father was a newspaper correspondent… and since he was married to a French woman, and their son was born there, we can assume that Papa Farman was a foreign correspondent in France. D’uh, eh.

I have no proof, but it seems self-evident.

Lucky British bugger that Papa Farman was, his French wife’s family came from  pretty decent money, which means that Henri/Henry Farman didn’t really have to do any real work.

He decided, when he was old enough, to become an amateur sportsman.

Even in the 1900s, professional sports were still somehow seen as corrupt and unethical. Many is the time that they were.

Farman first pedaled his way to becoming a champion bicyclist in the 1890s before moving up into motorcycle racing in the 1900s, racing for Renault in the Gordon Bennnet Cup. 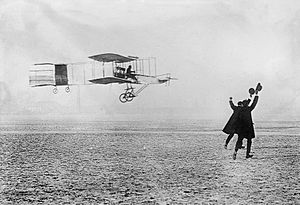 The 1907 Voisin aeroplane flown by Farman—called the Voisin-Farman I— flying in 1908.

In this 1907 Voisin, Farman would became one of the era’s most famous pilots on the planet, setting record after record for distance and duration, including:

This was all in the 1907 Voisin Biplane that was also known as the Voisin-Farman I. The aeroplanes were known by the Voisin moniker, and then by the person’s name they were sold to, and then a number, denoting how many that pilot might have owned.

Of course, the very famous Jane’s All the World’s Aircraft calls this aeroplane the Voisin II (mostly because it was built after the Voisin I owned and flown by Delagrange. Regardless, Voisin built about 60 of these aircraft.

Farman, by the way, personally modified his aeroplane to improve performance. So impressive were his modifications, that Voisin added them to later version of his aircraft.

I should point out that when Farman first flew with a passenger on March 29, 1908, first flew two kilometers on March 21, 1908, and was the fist to fly a one kilometer circuit on January 13, 1908… no one outside of a few people had any idea that the Wright Brothers had made the first aeroplane  flight some four+ years earlier in December of 1903.

Or that Albertos Santos-Dumont flew his 14-bis aircraft some 25 meters as early as October 23, 1906.

All that secrecy Orville & Wilbur Wright… just to secure a military deal before everyone else… meanwhile… others are taking their successful designs and moving farther and farther ahead.

Come on! You boys were bicycle manufacturers and sellers… put some damn wheels on your aeroplane!

In 1909, Farman opened up a flying school at Châlons-sur-Marne, France with (George) Bertram Cockburn as his first student… a person I will do a biography on soon enough. 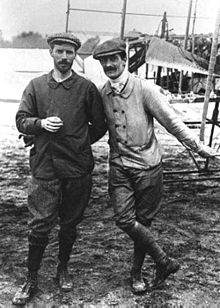 Now… Farman really loved his Voisin aeroplane… but man was he pissed when Voisin founder Gabriel Voisin took an aeroplane that was supposed to be sold to Farman—that was had designed to Farman’s specifications—and instead sold the aircraft to J.T.C. Moore-Brabazon (who used the aircraft to perform the first officially-recognized aeroplane flight in England on May 2, 1909. Moore-Brabazon named his aeroplane the Bird of Passage.

Farman was rightly ticked off at Voisin, and caused him to start up his own aeroplane manufacturing business called Avions Farman (Farman Aviation Works).

The very first aeroplane designed and built there was the Farman III – a highly successful machine.

I should point out that Henry’s brother Maurice (Morris? – I assume that since he, too, was born in Paris and his dad was still British, he could have actually been British or French) had earlier constructed his own biplane in February of 1909 – and like Henri’s, was also based on the 1907 Voisin Biplane.

The Maurice Farman MF.1 biplane had a pilot’s nacelle and used a Renault inline motor. Henri’s Farman III did not have a nacelle, and used a Gnome engine built by the Société des Moteurs Gnome. Henri and Maurice only began to work together in 1912.

How good was the Farman III? Others copied his design (copied initially from Voisin), but called it the Farman type, and were soon copied in Britain for the Bristol Boxkite, Short S.27 and the Howard Wright 1910 biplane (not related to the Wright Bros… but one of these aircraft was used by Thomas Sopwith (he of the famous Sopwith Camels).

The Farman III was also built in Germany (legally) as the Albatros F-2 by Albatros FlugzeugWerke.

If you want to find out more about this plane, go to my blog on Card #41.

Before the Reims meeting, the very first Farman III biplane sold was to Roger Sommer who after learning to fly, two months later set the French endurance record of one hour, 50 minutes and later two hours and 27 minutes and 15 seconds… Farman himself smashed these records at Reims. Sommer became an aircraft builder later, initially borrowing heavily from the Farman III.

The Farman III aeroplanes in all their incarnations also became know for their speed in the early days, with many pilots winning trophies, but really… this was a long-distance flyer.

As for Farman and the Farman Aviation Works family business he ran with brothers Maurice and eldest Richard (Dick), they continued to design and build aircraft from 1908 through 1936, at which time France nationalized its aeronautical industry taking the Farman business (as well as Hanriot company) and placing it within the then just formed SNAC (the Société Nationale de Constructions Aéronautiques du Centre, sometimes known as Aérocentre).

The Farman Brothers (from left): Richard, Henri and Maurice Farman.

Maurice and Henri Farman retired at this time.

The SNAC was later liquidated at the conclusion of WWII, with assets distributed.

In 1941 the Farman brothers reestablished the firm as the Société Anonyme des Usines Farman (SAUF), but only three years later it was absorbed by Sud-Ouest. Maurice’s son, Marcel Farman, reestablished the SAUF in 1952, but it wasn’t successful and closed its doors in 1956.

If you are wondering why I never mentioned the Farman II aircraft… well… remember the airplane designed by Farman and sold by the Voisin company to Moore-Brabazon? That was to have been the Farman II.

Farman died in 1958 and is buried in the  Cimetière de Passy in Paris.

Andrew was born in London, UK, raised in Toronto, Canada, and cavorted in Ohtawara, Japan for three years. He is married, has a son and a cat. He has over 35,000 comic books and a plethora of pioneer aviation-related tobacco and sports cards and likes to build LEGO dioramas. He has written and been an editor for various industrial magazines, has scripted comic books, ghost-written blogs for business sectors galore, and hates writing in the 3rd person. He also hates having to write this crap that no one will ever read. He works on his Pioneers Of Aviation - a cool blog on early fliers - even though it takes him so much time to do. He also wants to do more writing - for money, though. Help him out so he can stop talking in the 3rd person.
View all posts by mreman47 →
This entry was posted in Aeroplane Factories, Air Shows, Aviation Art, Concepts, Firsts, Heavier-Than-Air, Motors and Engines, People, Pilots, Tobacco Card and tagged 14-bis, Aérocentre, Avions Farman, Bertram Cockburn, Farman Aviation Works, Farman I, Farman III, Gabriel Voisin, Gnome Omega motor, Gordon Bennnet Cup, Grand Prix d'Aviation, Henri Farman, Henry Farman, J.T.C. Moore-Brabazon, Leon Delagrange, Maurice Farman, Richard Farman, Roger Sommer, SAUF, SNAC, Société Anonyme des Aéroplanes G. Voisin, Société Anonyme des Usines Farman, Société des Moteurs Gnome, Société Nationale de Constructions Aéronautiques du Centre, Voisin, Voisin 1907 biplane, Voisin aeroplane, Voisin II, Voisin-Farman I. Bookmark the permalink.