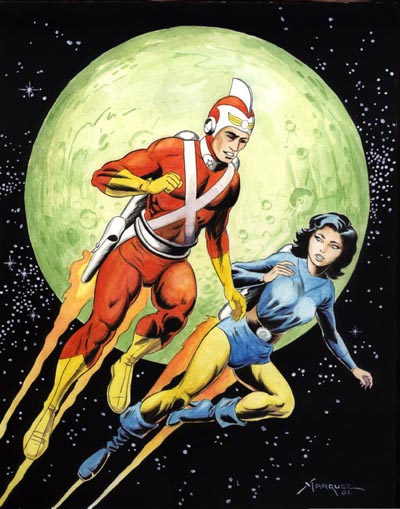 In my much younger days scientists promised us jetpacks. I want my jetpack! I want to fly!

Sadly, jetpacks and rocket suits a la Buck Rogers, Flash Gordon, Adam Strange, The Rocketeer, IronMan and other comic book characters remain a mostly scientific curiosity and out of the hands (and backs) of the general public.

But that’s where GoFly comes in.

The contest wants someone to create a working personal flying device.

This contest—offering US$2,000,000 in total prizes over the course of the 24-month competition—is calling on the world’s greatest thinkers, designers, engineers, and inventors to make the impossible possible—and who’s to say that isn’t you?

Someone get me my jetpack or personal flying vehicle a la George Jetson or Marty McFly hoverboard (with real hovering!!!) before I get too old!

GoFly is a Boeing-sponsored competition to build on the fantastic visions of the above named comic strip and cartoon shows, as well as the fantastical stuff of Icarus, and combining the primitive dreams with modern-day thinking and technology to take (finally) humans further than just one giant leap for mankind.

The invention should be user-friendly and, of course, provide the thrill of flight. Outside of these requirements, the function and design are up to innovator teams.

What’s cool about the GoFly contest, is that along with the nice financial prize, and getting one’s name glorified in greater fashion than the Barney-copter, is that participants will have access to global automation experts to help bring their ideas to life, without the worry of someone stealing their idea.

Boeing, the world’s largest and most forward-thinking aerospace company, has partnered with GoFly to turn dreams into reality.

Since its founding more than a century ago, Boeing (read about an early misadventure with Boeing founder William Boeing HERE has been at the forefront of innovation and exploration, pushing the limits of what is possible through game-changing technologies that impact the world and meet the needs of the global community.

Through GoFly, Boeing will help empower the next generation of dreamers and thinkers to take on one of the most ambitious and exciting opportunities of our day. As the Grand Sponsor of the GoFly competition, Boeing is sponsoring tomorrow.

Here’s what GoFly has to say:

Do competitors keep their Intellectual Property?
Yes, Teams will keep all of their intellectual property, except that teams will grant limited media rights to GoFly so that GoFly can publicize and promote the Competition and the Teams.

How much money can you win?
GoFly is offering US$2,000,000 in total prizes over the course of the 24-month competition. This purse will be spread out over three prize phases. Phase I will include 10 $20K prizes awarded based on written technical specifications; Phase II will include four $50K prizes awarded to Teams with the best VTOL demonstration and revised Phase I materials; and Phase III will unveil the Grand Prize Winner, awarded at the Final Fly-Off in the fall of 2019.

The Cool Part: ACCESS THE EXPERTS
In Phase II, the actual building begins, and innovators will have the opportunity to learn from and work with some of the world’s leading experts in aircraft design, systems engineering, fabrication and testing, and finance and funding.

With one-on-one guidance and monthly seminars, teams will have unprecedented resources to help bring their ideas to life. At the end of Phase II, we’ll award four prizes at $50,000 each based on a VTOL demonstration and revised Phase I materials.

Who are the experts? Holy crap… I get goosebumps looking at the names and companies involved:

Interested in making your dreams a reality? Visit http://goflyprize.com/

Andrew was born in London, UK, raised in Toronto, Canada, and cavorted in Ohtawara, Japan for three years. He is married, has a son and a cat. He has over 35,000 comic books and a plethora of pioneer aviation-related tobacco and sports cards and likes to build LEGO dioramas. He has written and been an editor for various industrial magazines, has scripted comic books, ghost-written blogs for business sectors galore, and hates writing in the 3rd person. He also hates having to write this crap that no one will ever read. He works on his Pioneers Of Aviation - a cool blog on early fliers - even though it takes him so much time to do. He also wants to do more writing - for money, though. Help him out so he can stop talking in the 3rd person.
View all posts by mreman47 →
This entry was posted in Firsts, Heavier-Than-Air, Lighter-Than-Air, Motors and Engines, News, People, Pilots, Research and tagged Adaptive Intelligent Materials & Systems (AIMS) Center, Aero-Science Technology Associates, AHS International, Alfred Gessow Rotorcraft Center, American Helicopter Museum and Education Center, Aurora Flight Sciences Corporation, Boeing Phantom Works, BRS Aerospace Inc., Cape Air, Clark School of Engineering, Conceptual Research Corporation, DARPA, Defense Advanced Research Projects Agency, DemoMode Marketing, GoFly, GRA Incorporated, Iridium Satellite, Lockheed Martin, Lockheed Martin Skunk Works, Nima Capital, ONERA, RRE Ventures, Sikorsky Aircraft Corporation, Smithsonian Institute National Air and Space Museum, University of Maryland, University of Pennsylvania, Unmanned Aircraft System, US Department of Defense, Vertical Lift Research Center of Excellence. Bookmark the permalink.