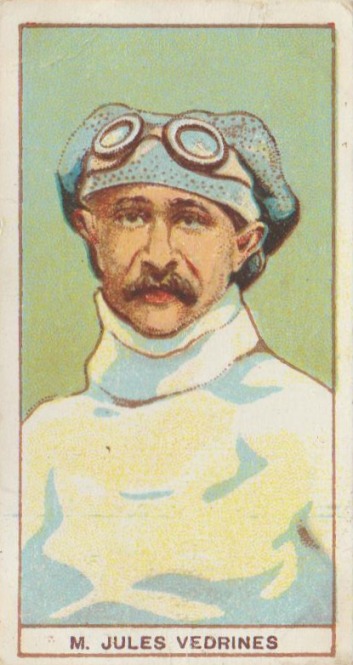 I am, however, adding the appropriate French accent above the first ‘e’ in Védrines.

If you glance up at the death date of Védrines, you’ll note that he is young… survived WWI, which means he was probably  involved in some sort of daring-do aviation accident.

Was it exciting? Was it stupid? Did it lead to any innovation? I don’t know… I’m writing this even before I read up on Védrines!

Actually… I know a bit about Védrines, considering I wrote about him within the copy for Card #69 HERE.

Okay… so Védrines… first pilot to fly at more than 100 mph (160 kilometers per hour) and for winning the 1912 Gordon Bennett Trophy Race.

I’m taking a short cut here considering I spent a great deal of time writing up that #69 blog… doing a copy and paste… but here’s it’s at least all Védrines. 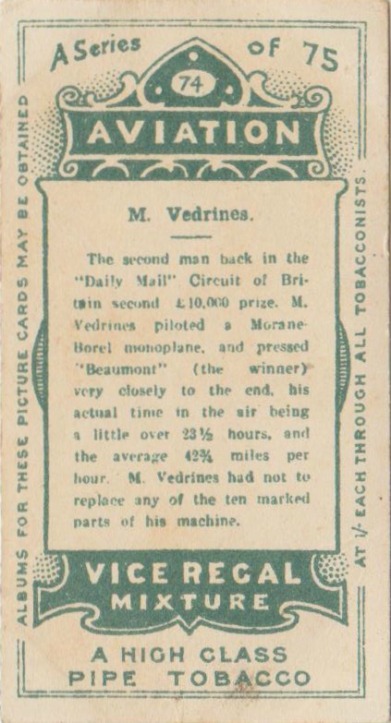 Jules Védrines was a pilot… and not just any pilot, but a test pilot… and a test pilot in the days when aeroplane’s had less power than some modern-day lawnmowers.

Born in Saint-Denis in Paris on December 21, 1881, he was brought up in what would have to be considered one of the “tough” parts of the city… a place that helped him develop a bit of a rough-and-tumble personality… which would actually help him in later years as a pilot, as being someone the common man could identify with.

He worked at the Gnome engine manufacturing factory before moving to England to work as aviator Robert Loraine’s mechanic in 1910.

Loraine, while primarily a stage actor, does have some claim to fame within the aviation (and video game industry). Flying a Farman biplane, in September of 1910, he achieved a measure of fame for being the first to fly from England to Ireland… except he actually crash landed in  the water about 60 meters (200 feet) from the shore… that’s close enough, right?

Later that same month, Loraine was a pilot of one of two Bristol Boxkites which took part in the British Army maneuvers on Salisbury Plain, during which he sent the first radio signals to be sent from an aeroplane in Britain.

Who was the other guy? Well… that would be Bertram Dickson, who was just featured in Pioneers of Aviation – HERE.

Loraine, by the way is famous… thanks to his personal diary that is cited in the Oxford English Dictionary for containing the first written example of the word joystick to describe aircraft stick controls. 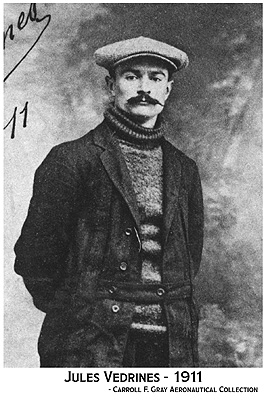 Back to Védrines. After returning to France, Védrines earned his pilot’s license (No. 312) on December 7, 1910.

Globally, when newspapers couldn’t get enough news on aviation, Védrines was a media darling. That love affair began when in April of 1911 he flew over a Catholic religious procession known as Mi-carême dropping bouquets of violets as the people entered the Place de la Concorde in Paris. Classy… like an angel from up on high…

In May of 1911, Védrines won the 1911 Paris to Madrid air race flying a Morane-Borel monoplane. You can read all about that confusing bit of aviation history HERE, where I have attempted to present the facts in a cohesive manner, but admit that I was stymied a few times by even the most basic of things.

You can see a video on YouTube featuring photo stills and some live motion picture work along with THE aviation song by clicking HERE. It won’t let me embed – even when I type it in character by character.If the link doesn’t work search YouTube by typing in: “Round Britain” air race in 1911.

He also came third in the 1911 Circuit of Europe race, a race with a total of 990 miles (1,600 kilometers) flying from Paris-Liège France to Spa-Liège in France to Utrecht Netherlands to Brussels Belgium to Calais France to London England.

In 1912, flying a Deperdussin 1912 Racing Monoplane built by the Société de Production des Aéroplanes Deperdussin, he was the first person to fly an aircraft at more than 100 mph (160 kph) and he also won the 1912 Gordon Bennett Trophy race in a Deperdussin Monocoque aircraft.

In January of 1912, Védrines, a politically active fellow, flew a plane over the Chamber of Deputies in Paris, dropping political leaflets demanding they provide more aeroplanes for the French Army.

Later that year, Védrines  ran for and lost a seat on the Chamber of Deputies for the constituency of Limoux. He ran as a Socialist, which wasn’t a bad thing in 1912.

In 1913 he flew from Paris to Cairo in a Blériot monoplane. But upon arriving in Nancy, France, but officials were adamant to let him proceed, because they figured he would fly a short cut over German airspace.

Now I don’t know why a Germany a mere one year away from WWI would not want anyone flying over their country – oh… right – but Védrines felt that up in the sky, there were no boundaries… that aviators should be able to fly anywhere and everywhere – screw international boundaries.

One hundred years later… despite his good intentions… a couple of global wars, more in Asia, and every nation on the planet becoming very protective of itself, airspace is rigidly controlled, and more or less observed unless you are China (in Japan) or Russia (also in Japan).

At that time, however, Védrines took off from Nancy pretending he would not fly over German airspace, but would change course for Prague when out of sight from the airfield. Sounds like a plan…

All well and good, but Védrines seems to have forgotten that he would be visible to the Germans in Germany whose airspace he was flying in.

He was tried in absentia by the Germans and sentenced to one year’s imprisonment… which essentially means he should not go back to Germany. But he did…

Still on the same race, he pleases the Sultan of Constantinople (Istanbul) by dropping a Turkish flag atop the Imperial Palace.

Things went downhill again when in Cairo, Védrines became embroiled in an argument with a Mr. Roux, after Védrines accused him of some unpatriotic French behavior.
Roux asked for a duel… but Védrines wisely said he wasn’t brave enough.

To resolve the dispute, the French Ligue Aerienne president Mr. Quinton told Védrines that the issue could only be resolved by the duel or him leaving Cairo.

So…. Védrines left Cairo, returned to Paris and then challenged Quinton to a duel in place of Roux. I’m guessing he found out that Roux may have been an established veteran at duels (IE he wins), whereas Quinton may have been a paper pusher. Always pick your battles, is the lesson here, I guess.

Védrines wanted to duel with pistols at 10 paces – and was all the rage in the Paris media of the day – but dueling experts quickly determined that Védrines had no right to issue the duel, and it was called off, probably with an apology… but I can not confirm that. 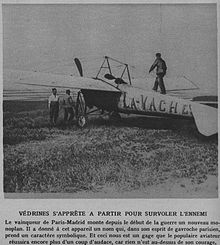 Jules Védrines’ Last Flight
When WWI broke out, Védrines performed clandestine missions— landing behind enemy (German) lines to drop or pick up agents in his Blériot XXXV Ibis aircraft La Vache (The Cow) – pictured above. He flew some 1,000 hours of reconnaissance missions and was awarded Order of the Day for it in July of 1915.

The aircraft had a picture of a cow on it (not seen in the photo), but it was meant to be an homage to his family’s roots in the Limousin region of France.

With the war over, on January 19, 1919 he landed his Caudron Airplane Company  G.3 on the roof of the Galeries Lafayette department store in Paris, winning a 25,000 franc prize which had been offered before the war. After his death a stone commemorating the achievement was placed there.

Three months later, on  April 21, 1919, he was killed when attempting to fly a Caudron C.23 long-range twin-engine night bomber after flying from Villacoublay, France to Rome, Italy, when the aeroplane’s engine conked out. He and his mechanic Guillain died on the forced landing near Lyon.

Andrew was born in London, UK, raised in Toronto, Canada, and cavorted in Ohtawara, Japan for three years. He is married, has a son and a cat. He has over 35,000 comic books and a plethora of pioneer aviation-related tobacco and sports cards and likes to build LEGO dioramas. He has written and been an editor for various industrial magazines, has scripted comic books, ghost-written blogs for business sectors galore, and hates writing in the 3rd person. He also hates having to write this crap that no one will ever read. He works on his Pioneers Of Aviation - a cool blog on early fliers - even though it takes him so much time to do. He also wants to do more writing - for money, though. Help him out so he can stop talking in the 3rd person.
View all posts by mreman47 →
This entry was posted in Firsts, Heavier-Than-Air, Motors and Engines, Pilots, Races, Races & Contests, Tobacco Card and tagged 'Bristol Boxkite, 1911 Circuit of Europe, 1911 Paris to Mardid race, 1912 Gordon Bennett Trophy, Bleriot monoplane, Caudron Airplane Company, Caudron C.23, Caudron G.3, Daily Mail Circuit of Britain race, Deperdussin 1912 Racing Monoplane, Deperdussin Monocoque, Farman, French Ligue Aerienne, Joystick origin, Jules Védrines, La Vache, Morane-Borel, Société de Production des Aéroplanes Deperdussin. Bookmark the permalink.