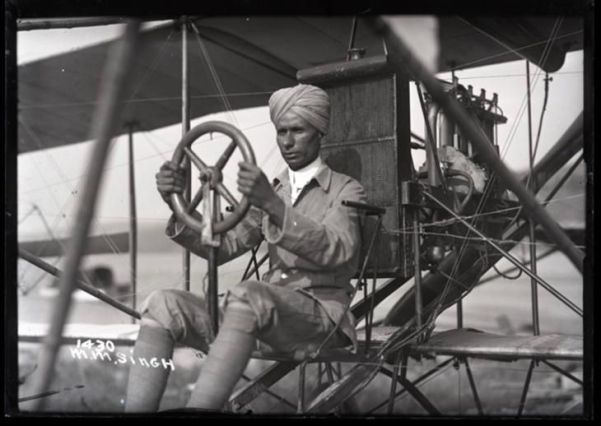 I have been called the “whitest Brown guy” by many a person – recently even… which I am meant to take as a compliment. Yes, even I… a Brown guy …. do love hockey and baseball, and know more about both sports than most (not all) people (part of the plan to try and fit in), so I guess they are correct. Heck, I’m even a Catholic!

My parents were born in India (I’ve never been there), and I was born in London, England, raised and am living in Canada, and spent three years teaching junior high school English in Japan.

To say the least, I don’t fit in anywhere where someone isn’t going to look at me and think me an outsider… and this is 2018.

I can only imagine what it was like in 1912 when a fellow named Mohan M. Singh made his way from India to become known in the U.S. as the Flying Hindu.

Hailing from Himmatputra, a village in the Moga District of Punjab, in northwest India, Singh shipped over to the U.S. in 1906 and worked as a servant in Chicago for a few years until he saw his first flying machine.

We do NOT have a birth date for Singh… nor, it seems a death date. Some websites cite his death date as sometime in 1942, but that is incorrect, as they have him confused with another Indian pilot with a similar name.

Think about it… if he came to the US and worked as a servant, he might have been as young as 14 in 1906. Now add the required number of years for him to have “died as a pilot in 1942 fighting the Japanese.” He would have been 50.

While there’s nothing wrong with a 50-year-old pilot, that would not have been the norm during WWII.

Like many people in the first decade of the 20th century, Singh caught the flying bug.

He saved up his money, and enrolled in the Glenn Curtiss Flying School located at North Island, San Diego in 1912.

His flying class was an odd mix of characters to say the least: 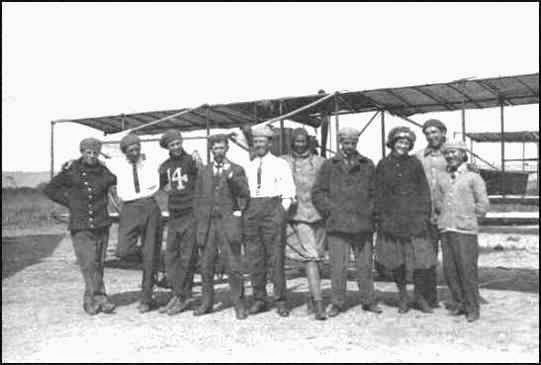 Yup… that’s him showing off his leg bound in a leather boot. You’ll see better in another photo below.

The Curtiss Flying School had attracted students from Poland and Japan, and even had a woman who dared to buck social traditions, too.

According to media of the day, the school was called “the most cosmopolitan gathering of flyers and pupils ever assembled.”

Singh only added to the melting pot, and was often an intriguing target for the media who saw the tall, slim Singh wearing a turban, and became fascinated with him.

For what it’s worth, Singh either played up his role as a mysterious man from India, or that really was his style. I’m guessing more of the former, only because he must have had a more flamboyant streak in him if he was part of the Curtiss Flying School and later part of the Curtiss Aerial Circus.

Singh apparently rarely spoke or smiled, and it was reported he was a vegetarian who only drank water… maybe he was shy, or tried a different tact to get people interested in him.

He told reporters that he was on leave from the British Indian Army (India only gained independence from Great Britain in 1947),which was why he had the time to learn how to fly at the school.

Singh says that the Army wanted him to learn how to be a pilot and to serve in its soon-to-exist aeroplane corps.

That might be true. But I can’t find evidence that it was.

Media called him an Indian Prince, a Major and a Captain, and was either from Delhi (called Delhi or New Delhi interchangeably) or Bombay (now known as Mumbai).

So which was he? How could the media get it so wrong? I’m guessing he was feeding the media different stories in order to maintain an air of mystery (pun intended).

We do know that Singh graduated from Curtiss flying school, earned pilot’s license #123 (in the U.S.), and was the first pilot from India to earn his aviator license.

After securing his license, Singh performed for the Curtiss-Wright Aviators aerial circus, and was billed as the “Only Hindu Flyer in the World.”

At least the circus didn’t have him act as an Indian rubber man, but treated him as an equal in the air. 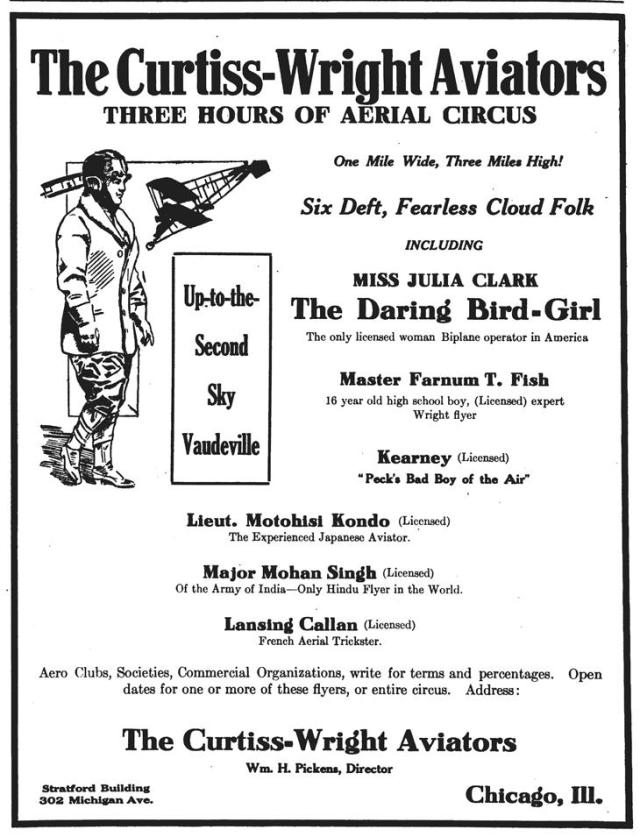 As you can see in the advertisement above, Singh is listed as a Major with the Army of India… so… why isn’t he back in India doing flying stuff for them? Why does he have all of this free time to be an aerial pilot and performer?

I’m pretty sure the Army – any army – wouldn’t allow someone still under their jurisdiction to work a second job. They kind of frown on that sort of stuff, unless that same work is actually work for the Army.

After traveling to Hammondsport, New York, Singh learned how to fly a Curtiss Hydroplane (an aeroplane that lands and takes-off from the water).

Singh apparently became quite good at flying the hydroplane, and in 1913, Curtiss asked him to help him promote his products in Europe when it seemed that the world would be heading towards some sort of world war. 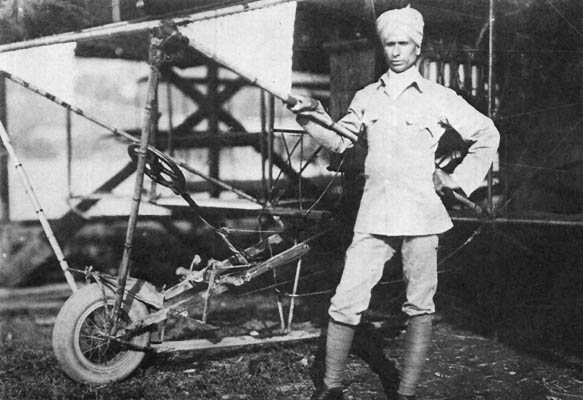 Wow… Singh is a pretty good pilot, so much so that Curtiss… one of the era’s preeminent aviation gurus wants him to help sell his aviation machines in Europe?  The skies the limit!

Except… one year later when the Great War (aka WWI) broke out on July 28, 1914, our man Singh was not headed back to India to help with the military there… nor did he go to Britain to help train the new flyboys… instead, Singh was in Los Angeles, California working as a butler and chauffeur for some rich family.

Singh wanted to be an American citizen, and tried to be one… the only problem was, that the United States would only let immigrants who were classified as Caucasian try and become citizens… you know, to keep out the riff-raff.

Back then, no one was sure just what the fug sub-continent Indians were! Negroes and Orientals definitely weren’t Caucasian.  Heck… I have a 1930s Canadian encyclopedia set that declares that the Aboriginals from Australia are a class of sub-human. That’s right… not human, but sub-human. No finger pointing… that’s just how things were back then.

After many years of legal battles, Singh gained his American citizenship… but then had did taken away in 1924 after the United States Supreme Court ruled that South Asians could not be considered White, and did not qualify for citizenship.

Back then, Caucasian meant White… regardless of the scientific definition. But pssst… I’ll let you in on a little secret… nowadays, Indians are classified as Caucasian. Singh missed out by a few decades.

Not wanting to go back to India, and still yearning to enjoy life in the United States, Singh decided to change things up.

If he couldn’t be White, he could still hang with them… changing his persona to the stereotype that people back in the 1920s expected of someone of his color.

He figured few people would realize his name was based on the the 15th century poem  (and chant):

Some of you may have heard the poem being chanted by a sect of Hare Krishna’s at the airports, but that’s not anything to do with anything here.

As the new Yogi Hari Rama, Singh created his own Super Yoga Science using real exercises and writings he stole from others.

It must have worked, because he made money as the Yogi, proving he was smarter than the average bear, er guy, as he traveled across the United States teaching his fake religion. I can see the oxymoron there that some of you have identified.

And then… after his tour ended in 1928, Singh simply vanishes… gone… leaving behind 13 Americans he had appointed as teachers of his Super Yoga Science, and a national organization called The Benares League of America, the largest yoga organization in the country.

A con man? Is this what has become of our Flying Hindu? Did he lie to his Super Yoga Science students when he told them he could fly? Did he mean levitation, or was it just a nod to his past as a pioneer of aviation?

So… whatever happened to Singh?

A guess might be that he ticked off the wrong people with his Super Yoga Science and simply went the way of Jimmy Hoffa… or perhaps he made his fortune and traveled back home to… to where indeed? India? A guy who desperately wanted to be American isn’t going to slink back to India.

Did he die soon after his religious tour? Did he simply fade away and live off his dirty money? Did he die in some unknown aviation accident?

No one really knows… and so in life, as in death, Mohan M. Singh aka Yogi Hari Rama is a mystery.

PS… I used the story from the Smithsonian website (HERE), for a fair bit of information on Singh.

Andrew was born in London, UK, raised in Toronto, Canada, and cavorted in Ohtawara, Japan for three years. He is married, has a son and a cat. He has over 35,000 comic books and a plethora of pioneer aviation-related tobacco and sports cards and likes to build LEGO dioramas. Along with writing for a monthly industrial magazine, he also writes comic books and hates writing in the 3rd person. He also hates having to write this crap that no one will ever read. Along with the daily Japan - It's A Wonderful Rife blog, when he feels the hate, will also write another blog entitled: You Know What I Hate? He also works on his Pioneers Of Aviation - a cool blog on early fliers. He also wants to do more writing - for money, though. Help him out so he can stop talking in the 3rd person.
View all posts by mreman47 →
This entry was posted in Air Shows, Firsts, Flying Schools, Heavier-Than-Air, People, Pilots, Seaplanes and tagged Curtiss Aerial Circus, Curtiss Flying School, Curtiss Hydroplane, First pilot from India, Flying Hindu, Glenn Curtiss, Mohan Singh, Smithsonian’s National Air & Space Museum, Super Yoga Science, The Benares League of America, Yogi Hari Rama. Bookmark the permalink.