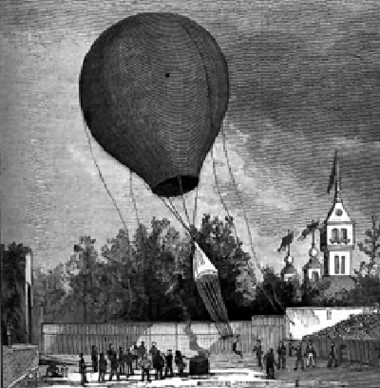 A similar set-up to what Hogan would have used in his parachute jump in 1888.

Some of the facts I have uncovered make me wonder if, as is claimed, Canadians saw the first parachute jump in their country ON September 4, 1888 as the Internet evidence says.

On this date, September 4, 1888, a gentleman named Edward Hogan made the very first parachute descent in Canada, jumping from a hot-air balloon – somewhere in Quebec.

Well, I have found a corresponding story, that takes place a couple of weeks later in New York, that involves a parachute jump by the same man. At least I assume it’s the same man.

Except that now, he is known as “Professor” E.D. Hogan – and since he was at a fair in New York state, I can correctly assume that his parachute jump in Canada was done for the same reason—for showmanship and money.

Here’s is the newspaper article from the Democrat and Chronicle newspaper of Rochester, New York, Friday Morning, September 21, 1888. It briefly describes what the parachute jump was like, and why the 1888 newspaper reporter wasn’t very good.

A Successful Parachute Descent.
Special Dispatch to the Democrat and Chronicle.
Mount Morris, Sept. 20—The fair of Mount Morris Agricultural Association opened to-day with entries and exhibits ahead of any previous year. The balloon ascent and parachute jump of Professor E.D. Hogan, advertised for 2 o’clock, did not take place until 3:25 P.M., when he rose to an altitude of 7,000 feet, at which height he made his leap and fell four hundred and fifty feet before the parachute opened. The parachute then filled instantly and his descent was checked, when he floated gradually to the earth, landing on his feet in a field about one-fourth of a mile from Shakura crossing of the Erie railroad, and about one mile direct from the fair ground, in seven minutes and thirty seconds from the time of starting. The ascent was one of the best ever made and was witnessed by about 2,000 people. He goes up again to-morrow, Friday, at 5 o’clock P.M., when an immense crowd is expected.

I have no idea if the article does say Shakura, Shakira or Sitheri – it’s too blurry to read, but it’s not important to the story.

Cool, huh? Mount Morris is a town in Livingston County, New York, U.S.A. with, as of 2010, a population of 4,465. Still sleepy and quaint. Of course, it could also be the village within the town of Mount Morris, which has a population of 2,986. I think I am more confused over this, than I am over the “Professor”. Mount Morris is 34-miles from Rochester, NY, according to old Erie Railroad data, with service to Mount Morris discontinued on January 21, 1940.

My complaints about that newspaper article: spell out the parachutist’s full name! Where is the parachutist from? How old is he? How many jumps had he made prior to this one? Why was his initial ascent delayed for 85 minutes? What type of balloon? Was it his own or local? How do you know he went up 7,000 feet and fell 450 feet? What was his parachute made of?

And those were questions off the top of my head.

I find it interesting that Professor E.D. Hogan stuck around Mount Morris to perform a second jump the next day. I would guess that even in 1888, Mount Morris was a small town – probably smaller than wherever Hogan was in Quebec… so did he stay for a second day to jump again in Quebec?

It turns out there are actually more than one Hogan men doing parachute jumping!

All brothers! I know that one is from Jackson, Michigan…

Erin Hogan became the world’s youngest sky diver as of 2002, when she tandem jumped at age 5. Any relation to Edward Hogan or John Hogan or W.M. Hogan? Probably, but you did not hear that here. Otherwise, it’s a marvelous coincidence.

Anyhow… if anyone can direct me to a properly dated newspaper article on E.D. Hogan’s Quebec jump on September 4, 1888, it would be appreciated. You know… proof.

Andrew was born in London, UK, raised in Toronto, Canada, and cavorted in Ohtawara, Japan for three years. He is married, has a son and a cat. He has over 35,000 comic books and a plethora of pioneer aviation-related tobacco and sports cards and likes to build LEGO dioramas. He has written and been an editor for various industrial magazines, has scripted comic books, ghost-written blogs for business sectors galore, and hates writing in the 3rd person. He also hates having to write this crap that no one will ever read. He works on his Pioneers Of Aviation - a cool blog on early fliers - even though it takes him so much time to do. He also wants to do more writing - for money, though. Help him out so he can stop talking in the 3rd person.
View all posts by mreman47 →
This entry was posted in Air Shows, Firsts, Lighter-Than-Air, Parachute, People, Stunt Flying and tagged Democrat and Chronicle newspaper, first parachute jump, First parachute jump in Canada, Hogan brothers 19th century parachute performers, John Hogan parachutist, Mount MOrris Newyork, Professor Edward D Hogan, Professor WM. Hogan parachutist. Bookmark the permalink.