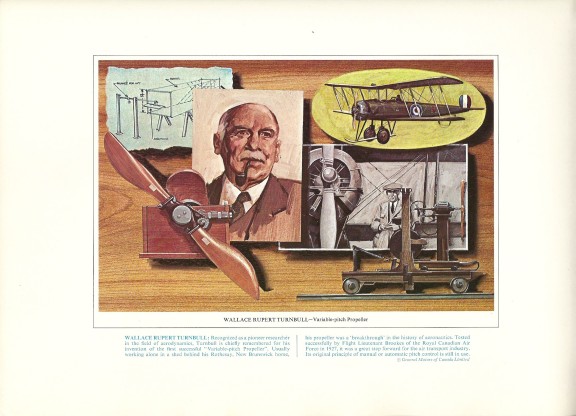 I don’t even know why I have such things, but I do. I have a bunch of giveaway sheets from the General Motors of Canada Limited offering short bios on some famous (at one time) Canadian inventors.

While Canada lays claim to Alexander Graham Bell – as the inventor or the telephone, he was indeed a pioneer in Canadian aviation… and much, much more on this and the AEA (Aerial Experiment Association) at a later date. I did actually write a published magazine article on the topic a few years back. Plus… I own a set of photos previously owned by one of the guys in the AEA who built Canada”s first airplane. Oh yes, I do. See that photo that’s under the Pioneer’s Of Aviation banner… that’s part of one of 100+ original photos…

Another Canadian inventor was Reginald Fessenden… who invented radio BEFORE Marconi… but since no one was better at self-promotion than Marconi, no one has heard of Fessenden… suffice to say that my late father-in-law wrote a book on him… more on Fessenden’s contribution to aviation shortly.

So, it would come as no surprise to learn about some of Canada’s other aviation pioneers.

Here’s what the image above has to say about Turnbull – and then some more facts from the web.

Wallace Rupert Turnbull: Recognized as a pioneer researcher in the field of aerodynamics, Turnbull is chiefly remembered for his invention of the first successful “Variable-pitch Propeller”. Usually working alone in a shed behind his Rothesay, New Brunswick home, his propeller was a ‘breakthrough’ n the history of aeronautics. Tested successfully by Flight Lieutenant Brookes of the Royal Canadian Air Force in 1927, it was a great step forward for the air transport industry, Its original principle of manual or automatic pitch control is still in use.

Here’s some more data from the Internet… but to be honest, that little paper I found from GM does add some interesting facts to his story.

Born in Saint John, New Brunswick, was an 1893 graduate from Cornell University with a degree in mechanical engineering.

His post-graduate was at the Universities of Berlin and Heidelberg, Germany doing physics.

He built the very first wind tunnel in Canada back in 1902, and investigated the stability of aircraft and the employment of airfoils over the next 10 years or so.

But, during WWI, he became most-famous for his work on perfecting the variable pitch propeller.

Working for the Frederick Sage and Company of aircraft builders in England, he designed a number of propellers, with the variable pitch propeller being the best.

A controllable pitch propeller (CPP) or variable pitch propeller is a type of propeller with blades that can be rotated around their long axis to change their pitch. If the pitch can be set to negative values, the reversible propeller can also create reverse thrust for braking or going backwards without the need of changing the direction of shaft revolutions.

It was favored by some pilots in WWII because even when the engine was no longer running the propeller could be feathered.

On hydraulically operated propellers the feathering had to happen before the loss of hydraulic pressure in the engine.

The propeller was actually further refined by the Curtiss-Wright Corporation… Glenn Curtiss was also a member of the Alexander Graham Bell teem, the AEA, an American who was a founder of the US aircraft industry. Definitely more on Glenn Curtiss at a later date.

The Saint John Airport was briefly named after him – it has the call sign of CYSJ.

(Editor’s Note: For any of you RUSH fans out there… the song YYZ refers to Toronto’s Pearson  International Airport. The strange baseline in the song actually belts out a Morse Code of Y-Y-Z).

Turnbull was inducted in the Canada’s Aviation Hall of Fame in 1977.

Andrew was born in London, UK, raised in Toronto, Canada, and cavorted in Ohtawara, Japan for three years. He is married, has a son and a cat. He has over 35,000 comic books and a plethora of pioneer aviation-related tobacco and sports cards and likes to build LEGO dioramas. He has written and been an editor for various industrial magazines, has scripted comic books, ghost-written blogs for business sectors galore, and hates writing in the 3rd person. He also hates having to write this crap that no one will ever read. He works on his Pioneers Of Aviation - a cool blog on early fliers - even though it takes him so much time to do. He also wants to do more writing - for money, though. Help him out so he can stop talking in the 3rd person.
View all posts by mreman47 →
This entry was posted in Heavier-Than-Air, Research and tagged Canadian inventors, Canadian pioneers of aviaton, propeller history, propellers, Variable Pitch Propeller, Wallace Rupert Turnbull. Bookmark the permalink.