History Behind The Card: “Vedovelli” Multiplane.

But… maybe I did find something about his birth and death date. See below!

This Wills’s aviation Card #53 is yet another tough one to research… even Flight magazine’s famed archives contain zero mention of Édouard Vedovelli from 1909 through 1920… same with Jane’s All The World’s Aircraft 1913… zippo.

And a photo of  Édouard Vedovelli? I’m sure one exists – but who knows. 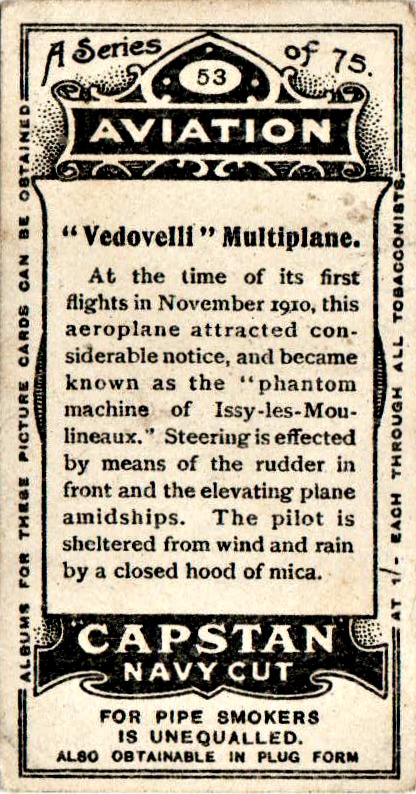 What can we take from that? Well… just look at the aircraft! How the heck was that supposed to provide sustained heavier-than-air flight?

From the Aerodrome (http://www.theaerodrome.com)- a very good resource site for any historical aviation look-see, some of the commentators have provided all of the information of the multiplane/seroplane’s designer, and the aircraft itself.

An electrical appliance manufacturer, Édouard Vedovelli is purported to have been born in France, with the assumption that the family name is of Italian origin.

Well… plenty of information there… we know that since all of these patents are written in French, he must indeed have at the very least lived in France.

As well… he was alive at some point in 1927… it’s an estimation that the patent office must have examined his patent request at the very latest on August 27, 1927, assuming that they looked at Vedovelli’s submission the same year it was submitted.

Also… it appears as though after receiving the patent for an aeroplane on January 31, 1913… he gave up trying to create a heavier-than-air aircraft, and even gave up trying to further aviation technology, concentrating his energies on cement posts.

I haven’t examined those patents, but perhaps they were for means of encasing electrical wires in cement…. like the light poles we have along highways et al.

I wonder if he tried to use electronics as a means of transmitting power along his many designs of aircraft?

Apparently his work as an electrical engineer – I assume he owned a company – allowed him a fair bit of financial riches, allowing him to partake in his love of aviation.

Well… he did own a company.

From what I have been able to glean, the Vedoveilli & Priestly electrical company provided electrical equipment and lighting of the Electricity Palace at the 1900 World Expo.

Above is a catalogue of materials produced by Vedovelli & Priestly published in 1899 for such items as electric circuits, circuit breakers, switchboards, panelboards and batteries.

At around the same time, Vedovelli & Priestly built a hybrid electric car that ran on an electric battery and gasoline that was apparently capable of reaching 80 kilometers an hour. 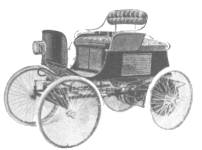 It had a 1.75 horsepower Dion-Bouton gas engine that was coupled to a dynamo to generate an electric current of 10 Amps under 100 Volts… apparently the entire “motor” set-up weighed a mere 140 kilograms (308.65 pounds).

So… we can assume that Vedovelli was at least 20 years old in 1899 when the car was built… ergo he was born in 1879 or earlier and lived to 1927 or later according to the patent filing dates.

But… nope… I just found a French 1896 newspaper mentioning Vedovelli as an electrical engineer… again assuming a minimum age of 20, he was born in 1876 or earlier.

Okay… I found (at http://gallica.bnf.fr) a France Ministry of Justice bulletin that (translated via Google Translate) declares the birth of :

Let’s look at his patents now: What is interesting in the listing of patents issued to Vedovelli (found HERE) is that some of them are named as “Aéroplane” and “Machine volante” = Aeroplane/airplane and Flying machine.

I suppose the flying machine was Vedovelli’s way of stating that his Multiplane was a whole new animal, or perhaps the patents were for a different type of aircraft like a helicopter or glider… but that is just me guessing.

I am unable to actually get in and look at the patents (can’t figure out how, and I’m afraid I would have to pay to do so… and I’m cheap), so everything is just guess work at this time. Perhaps if one of you knows how to find out more information, you could share either “how” you got it, or just what that information entails.

Not a particularly strong drawing—it doesn’t show where the propeller is located—but it does, however, offer us a comical take on an aircraft that because of a lack of data on the Internet, must have been a complete failure.

In fact, all of Vedovelli’s aircraft appear to have been failures. 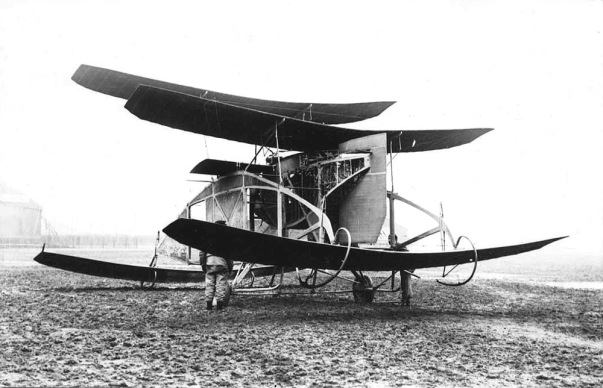 Still… the more I look at it, the Multiplane has some good ideas… a bow at the front of the fuselage to break the wind around it. The front splitter wing at the lower level to help air get under the plane to provide lift… the enclosed cockpit… it’s too bad it was so under-powered.

Oh well. Let’s take a look at the Vedovelli Multiplane, based on writings found within Aerodrome.

I am curious to know where the information was gathered from – perhaps a book somewhere? 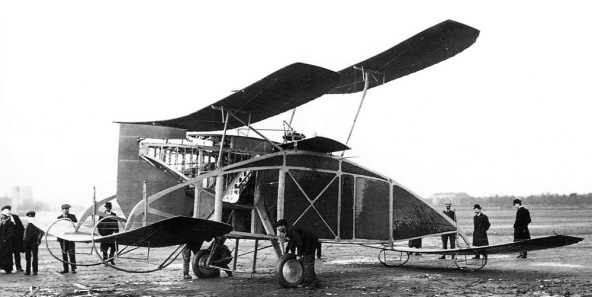 The Vedovelli Multiplane. The front of the plane is facing left, in case you were wondering. Does anyone else like the bay windows for the pilot to see in an almost panoramic view… except directly in front of him. Hmmm, two wheels.

Short fuselage with a fully-enclosed cockpit – a rarity for the era.

Motor was a 4-cylinder water-cooled engine place directly behind the pilot.

At the side of the fuselage are large radiators to cool the engine.

In the first version of the Vedovelli Multiplane, the engine drove a single pusher propeller (it means it is placed behind the pilot). It had very high tailbooms.

Vedovelli attempted to fly the Multiplane in 1911 at the Issy les Moulineux flying field. Here was the result: 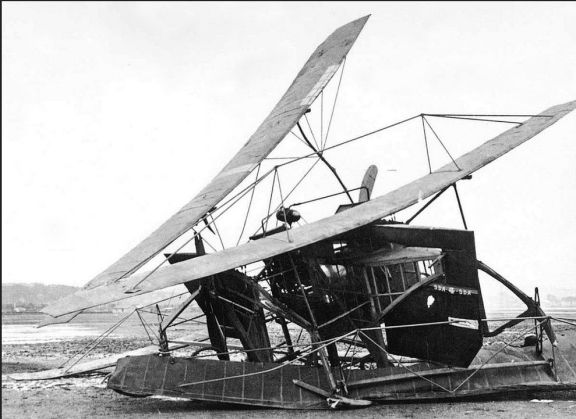 After the ill-fated attempt to fly in January of 1911. If you look closely, you can see one of the propeller blades between the two large wings – thrust out from the “safety” of the rear of the fuselage.

The reason given for the failure was that the propeller was almost entirely enclosed.

A rear view of the Vedovelli Multiplane attempting to take off. The propeller is contained within the large open rear cabin space. Hmmm… three wheels. Perhaps a later model?

In the ensuing years until 1912, Vedovelli continued to tweak his design… so perhaps each tweak is represented by a new patent? Hmm… probably. In the photo directly above you can see that the Multiplane has three wheels, whereas the first black and white photo above depicts it with two wheels. Which came first?

Since the Wills’s card only depicts two wheels – and it’s a 1911 card… and data suggests that tweaks occurred through 1912, perhaps we can assume it was two wheels first, and then a third front wheel added for additional balance and distribution of weight,

Apparently one version had two propellers on additional skeletal tailbooms… but still driven by that same single 4-cylinder motor.

The Multiplane weight was estimated to be around 750 kilograms (1,653 pounds).

Lastly… I did find a death notice in a French newspaper database housing Le Petit journal dated August 14, 1926, which I have translated via Google Translate, so it may not be perfect because I didn’t type in the original accents:

We learn of the death of Mr. Edouard Vedovelli, engineer, officer of the Legion of Houneur, who is specialized in electric works. He organized the feast lighting of the Decorative Arts Exhibition. The obsequies will take place tomorrow at 10 hours. We will meet at the mortuary, 4 rue de Naples.

A member of the French Legion of Honour? Cool!

So, for the first time ever, allow me to present the birth and death details of Edouard Vedovelli :

Of course… I am guessing at the actual death date… because it depends on just WHEN the newspaper picked up on that detail. But hey… 55 years-old at the time of his death.

If anyone has any further data on the life of Édouard Vedovelli,and/or detailed information on his patents and of the Multiplane – please share with me. Cheers.

Andrew was born in London, UK, raised in Toronto, Canada, and cavorted in Ohtawara, Japan for three years. He is married, has a son and a cat. He has over 35,000 comic books and a plethora of pioneer aviation-related tobacco and sports cards and likes to build LEGO dioramas. He has written and been an editor for various industrial magazines, has scripted comic books, ghost-written blogs for business sectors galore, and hates writing in the 3rd person. He also hates having to write this crap that no one will ever read. He works on his Pioneers Of Aviation - a cool blog on early fliers - even though it takes him so much time to do. He also wants to do more writing - for money, though. Help him out so he can stop talking in the 3rd person.
View all posts by mreman47 →
This entry was posted in Aviation Art, Concepts, Failures, Heavier-Than-Air, Motors and Engines, People, Tobacco Card and tagged Aerodrome, Flight magazine, Jane's All the World's Aircraft 1913, Vedovelli & Priestly, Vedovelli Multiplane. Bookmark the permalink.